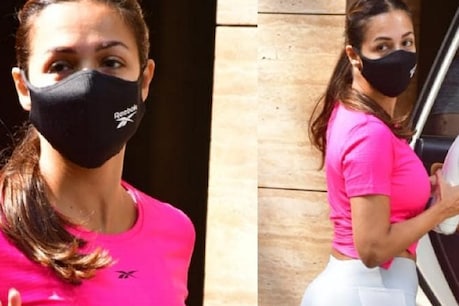 In this photo, Bollywood actress Malaika Arora is seen flaunting her stretch marks.

new Delhi: Malaika Arora Bollywood’s fitness diva. His yoga videos and gym photos are viral photos. Some such photos have surfaced again in which Malaika is seen flaunting her stretch marks. These photos of Malaika are from her fitness class. Having pregnancy marks after pregnancy is a common practice and it is not necessary to hide them after being a Malaika actress. Just a few users started making ugly comments on their photos.

These pictures of Malaika Arora are shared by Viral Bhayani on her Instagram account in which Malaika was going for a work out in a pink T-shirt and yoga pants. He also posed for the camera during this time. On these photos of Malaika, a user commented that Tammi showed old age, while another user wrote that right now it looks old and getting old. Meanwhile, in support of Malaika, some users commented that what is the big deal? At the same time, a user supported Malaika that these people are doing Malaika and the same people praise Jennifer Lopez, Jennifer Aniston. There is also a limit to hypocrisy. Please tell that even after officializing the relationship with Arjun Kapoor, people trolled Malaika a lot. The actress was open about her divers and trolling on Kareena Kapoor Khan’s show. Malaika does not pay special attention to all these things, but she prefers to block trollers more. Talking about the workfront, Malaika appeared as a judge in a dance reality show a few days ago.