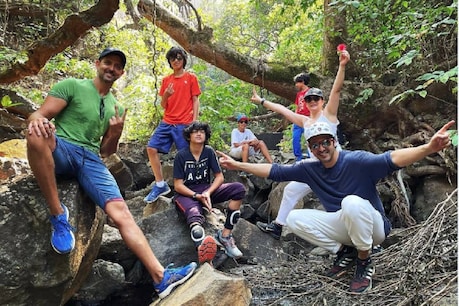 Hrithik Roshan (HRITHIK ROSHAN) himself has shared this photo of his trip on Instagram wall, which his fans are very fond of.

new Delhi. Bollywood superstar Hrithik Roshan (HRITHIK ROSHAN) They give full time to both their work and family. Hrithik is often seen spending time with family in free time. On the day of 26 January, he was seen enjoying trekking trips with his children. Hrithik himself has shared a photo of his trip on Instagram wall, which his fans are very fond of. He shared a photo of the family, in which both his sons Hridan and Rehan, along with his ex-wife’s brother Zayed Khan and his family, are also seen. In 5 hours more than 10 lakh people have liked this picture.

Hrithik Roshan shared the photo of this trekking trip and wrote in the caption, ‘Something happens by walking in bumpy places. I don’t know what it is, but it makes my heart smile. In this picture, one can clearly see the enthusiasm and joy of trekking on everyone’s face. Suzanne’s brother posing with Hrithik in this photo Zayed Khan He is also an actor. He was recognized with the film Main Hoon Na opposite Shah Rukh Khan. However, in 10 years, he has done only three films, in which Love Breakups Zindagi, Tej and Sharafat have been taking oil. Choreographer Farah Khan wrote great pics commenting on Hrithik Roshan’s photo. At the same time, Zayed Khan reposted the same post on his page. Talking about the workfront, Hrithik Roshan has recently announced the film ‘Fighter’ on his birthday. In this film, he is going to be seen with Deepika Padukone for the first time. Deepika Padukone shared the teaser of this film, on which it was written that ‘dreams really come true’. Let me tell you that Siddharth Anand will direct this film. The film will be released in September 2022.