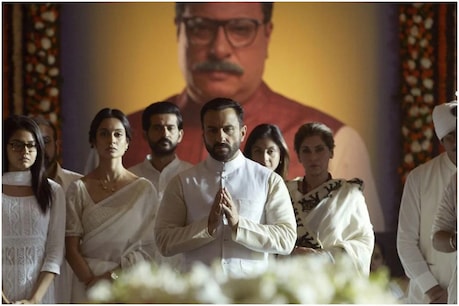 A scene from ‘Tandava’.

The ruckus about the web series ‘Tandav’ is not ending. Several criminal complaints were filed in various states against the series director Ali Abbas Zafar and others.

new Delhi. The ruckus about Amazon Prime’s web series ‘Tandav’ is not ending. Several criminal complaints were filed in various states against the series director Ali Abbas Zafar and others. On petitions requesting cancellation Supreme Court (SUPREME COURT) I was to be heard today i.e. on Wednesday.

According to media reports, in the hearing, a bench of Justice Ashok Bhushan, Justice R Subhash Reddy and Justice MR Shah said on the petitions against the FIR that in the states where FIR has been filed, let the investigation be done, what is the problem? On this, senior advocate Mukul Rohatgi said on behalf of Amazon Prime that since the petitioner is from Mumbai, how will he fight the case in six different states? In such a case, the court should register FIRs registered in all the states and transfer them to Mumbai. The lawyer referred to the decision of the Supreme Court in other cases, including MF Hussain.

Significantly, the Uttar Pradesh Police had registered three FIRs in Lucknow, Greater Noida and Shahjahanpur. At the same time, other similar FIRs WEB SERIES) Was registered against people belonging to Madhya Pradesh, Maharashtra and Karnataka. Various state governments and police officers have been made parties in the petitions. An FIR was registered against the team under various sections of the Indian Penal Code and related sections of the Information Technology Act in Lucknow for hurting religious sentiments on the web series. However, in this case, the Bombay High Court granted transit advance bail to these four.