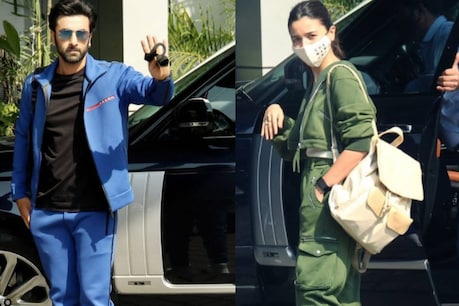 Ranbir Kapoor and Alia Bhatt are so much in love with each other that they look for an excuse to spend time together.

new Delhi: Celebrity couple Alia Bhatt and Ranbir Kapoor’s relationship is no longer hidden from anyone. Often, both of them are spotted hanging out with family, friends and each other. Discussions on the day of the marriage of both are also seen. These days, actor Ranbir Kapoor is busy shooting for Love Ranjan’s next film. Meanwhile, actress Alia Bhatt has also reached Delhi after taking a break from her shooting time.

Alia Bhatt was first spotted at Mumbai and then Delhi Airport. Alia appeared in a very stylish look at the airport. Aaliya wore a combination of white and black and had sunglasses. Looking at Alia, it seemed that she was going to walk in a fashion show, not at the airport.

Please tell that Liya Alia Bhatt has recently returned from Hyderabad after completing the shooting of director SS Rajamouli’s film RRR. Earlier, Alia has also resumed the shooting of Sanjay Leela Bhansali’s film ‘Gangubai Kathiawadi’. Meanwhile, due to poor health of Alia, she was also admitted to the hospital for a day. Now it is obvious that Alia has come to Delhi to spend time with boyfriend Ranbir Kapoor. Ranbir is shooting for director Luv Ranjan’s film in Delhi. Alia Bhatt and Ranbir Kapoor are working in the film ‘Brahmastra’. This film is being directed by Ayan Mukherjee.