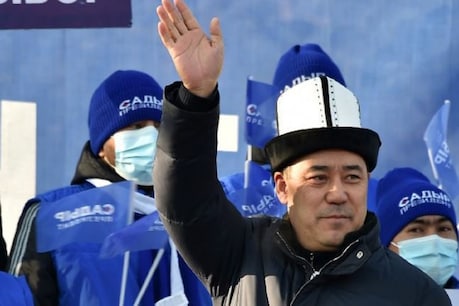 Nationalist politician Sadir Japarov has become the new President of Kyrgyzstan. Earlier, Japarov was serving a sentence in jail for kidnapping a regional governor.

Osh Nationalist politician Sadir Japarov has become the new President of the Central Asian country Kyrgyzstan on Thursday. Let me tell you, they have won heavily in the recent presidential election. In October last year, elections were held in the country after Kyrgyzstan President Suronbai Jeenbekov withdrew from power. Japarov was released from the jail during the agitations to remove Suronbai from the post.

The deadlock was going on since the disputed parliamentary elections in the country, in which election the government-backed parties won. Opposition parties forced President Suronbai Jeenbekov to step down on October 15, accusing him of tampering with votes. Zaparov was convicted in the kidnapping case of a regional governor, after which he was sentenced to prison in 2017.

Zaparov immediately after his release united supporters to remove President Suronbaye Genbekov from office and took power as the country’s interim leader. In a referendum held with the recent election, 81 percent of voters supported strengthening the presidential powers. Zaparov had said that he would move forward on drafting the relevant constitutional changes, which would be approved by another referendum in a few months.

Also read: Israel opens Embassy in UAE after friendship, Trump is playing an important roleAt the same time, Adakhan Madumarov, one of Japarov’s 16 rivals, refused to accept his victory and claimed that the vote was rigged. After the vote, Zaparov pledged that Russia would remain the country’s main strategic partner. Let us tell you that Kyrgyzstan became a separate country after the dissolution of the Soviet Union.