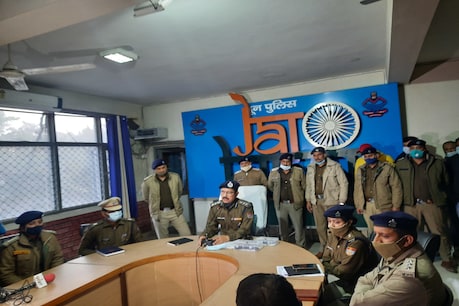 Police have arrested the accused.

Crime News: Dehradun Police has solved the Murder Mystery of Raju Boxer within 18 hours. Police say that Raju was killed due to a property dispute.

Dehradun. Of Uttarakhand Dehradun Police has solved the Murder Mystery of Raju Boxer within 18 hours. Police say that Raju was killed due to a property dispute. Chavez, the mastermind of the murder case, was from Saharanpur. In the case, 5 teams of police were involved in the revelation of the incident since late night. Within 18 hours, the police have arrested four accused including the partner and the shooter who shot. It is being told that the boxer was cheating his partners in the property work, due to which they removed him from the road itself.

After executing the incident, the accused hid in an under construction flat near ISBT. 5 teams patrolled for their patrol and finally police Got success Police have recovered two pistols and cartridges from them.

This is how the whole case was revealedOn Wednesday, the police revealed the assassination on Nehru Colony’s Ajabpur Mata Mandir Road within 18 hours. The SSP also announced a reward of Rs 2500 to the team who disclosed the incident. It is being told that Raju went to Boxer Khudbuda to drink alcohol on the plot of his friend Chavez Khan. As soon as he left, he was shot and killed by two scooters riding a scooter. Boxer’s friend Chavez was informed of the murder by the police. After this, 5 teams were formed late night under the leadership of SP City Sarita Doval. All the checkposts were sealed and CCTV footage was checked along with checking operations. Late night, 5 people were questioned. The investigation found the hand of his partner Vinay Kamboj in the murder of Boxer. Vinay told that Raju Boxer is having a property dispute with Chavez. Chavez revealed the incident only during interrogation.