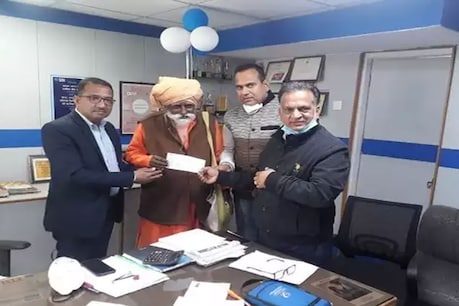 Sant Shankar Das (Fakkad Baba) was living in caves as a disciple of sacked Baba.

Swami Shankar Das donates 1 crore: Saint Shankar Das (Fakkad Baba), who has been living in the cave for 60 years, has donated one crore for the construction of the grand Ram temple in Ayodhya. The bank employees did not believe once.

Rishikesh. The faith of the people for the construction of a grand Ram temple in Ayodhya is so connected that they are ready to give their all. Something similar happened in Rishikesh. Sant Shankar Das (Swami Shankar Das), who has been living in the cave for 60 years, has donated one crore. People know him by the name of Fakkad Baba. Fakkar Baba reached the branch of Rishikesh State Bank on Thursday and handed over a check of one crore to the bank employees for the construction of Ram temple.

The bank employees did not believe once. Investigating this, when the employees examined the account, a substantial amount was found in the account of 83-year-old Swami Shankar Das. Baba donated this entire amount of his life’s earnings to the construction of the Ram temple to be built in Ayodhya. Fakkar Bab said that the goal of his life has been fulfilled today.

Significantly, this Fakkad Baba was living in the caves as a disciple of the sacked Baba. Baba deposited the amount received from the donations of the people who got from the sacked Baba and donated it to the Ram temple. State Bank employees immediately notified RSS officials in Rishikesh. Krishna Kumar Singhal, the city worker of the Rashtriya Swayamsevak Sangh of Rishikesh region, reached the bank and met Baba Shankar Das and deposited the check in the account of Ram temple.

Wanted to donate as secret donation

Although Fakkar Baba wanted to give this donation as a secret donation, but when the RSS officials spoke, Baba took a photograph while handing over the check. RSS officer Sudama Singhal said that Saint Shankar Das, who has been living in a cave in Rishikesh for 60 years, is a follower of the postal baba.

When PM Modi started the Bhoomi Pujan in Ayodhya and appealed to the people of the country to donate, Fakkar Baba donated his entire lifetime earnings to the grand Ram temple. A reverence flower has been offered on his behalf for Ram Kaj. Rishikesh is the city of saints. Every type of saint is seen here. The forests and caves here have been absorbed in austerity for many years, so this taphbhoomi is called Rishikesh.