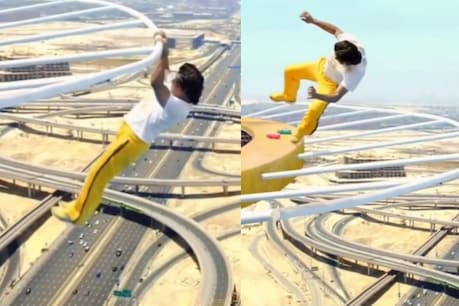 This video of King Khan is becoming quite viral.

Shah Rukh Khan is seen doing stunts in the air in a casual dress. This video has created a stir on social media as well as the Internet.

Mumbai. King Khan of Bollywood (Shah Rukh Khan) is in the news for his upcoming film ‘Pathan’. After a long break after the film ‘Zero’, Shah Rukh is making a comeback, so there has been a fierce mood regarding this film. His pictures and videos from the film’s set are becoming very viral. Recently, a video of King Khan is going viral, in which he is seen doing amazing stunts.

The video of Shah Rukh Khan going viral is being reported from Dubai. The video has been posted by his production company Red Chillies Entertainment on his official Instagram account. Fans are reacting fiercely to the new style by watching this video.

Shahrukh Khan is seen doing a stunt in the air in a casual dress. This video has created a stir on social media as well as the Internet. Shahrukh’s fans had never seen such a video before. Let us tell you that after the IPL, Shahrukh Khan is now busy in shooting for his upcoming film ‘Pathan’. In this film, Deepika Padukone will once again be seen sharing the silver screen with him. Earlier both of these pair have been seen together in Om Shanti Om, Chennai Express, Happy New Year.