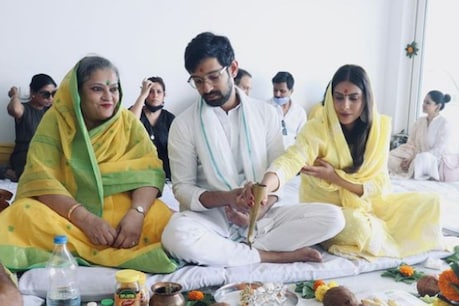 In the photo of Pooja of Vikrant Massey, her mother Aamna Massey and her fiancée Sheetal Thakur are seen sitting with them on the other side.

new Delhi: Talented actor Vikrant Massey is not an actor living in the limelight, but Vikrant remains very active on social media. Recently, Vikrant has taken a new home in Maya Nagari Mumbai (Mumbai). Vikrant has also shared home-entry photos, in which his fiancée Sheetal Thakur is also seen with him. While sharing the photo, Vikrant has also given a message to the fans and since then his post has gone viral.

In the photo of Pooja of Vikrant Massey, her mother Aamna Massey and her fiancée Sheetal Thakur are seen sitting with them on the other side. Posting these pictures, Vikrant wrote, ‘With Mary Human Modak and Better Half.’ Along with this, Vikrant has also written a note. In which he has written- ‘I am not married yet. Keep your best wishes’. Let me tell you that Vikrant is going to tie the knot with fiancée Sheetal Thakur soon. Vikrant bought his house before marriage. Vikrant and Sheetal have also worked together in a web series. Both of them appeared in Alt Balaji’s web series ‘Broken But Beautiful’. Talking about the workfront, Vikrant was seen in the film ‘Chhapak’ with Deepika Padukone. At the same time, Vikrant’s work was highly praised in the first part of ‘Criminal Justice’ released on the Ototi platform. The second season of this web series has been released a few days ago.