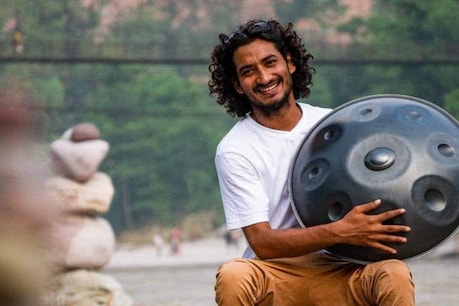 These days, the charm of the tunes of a foreign instrument hand pen on the banks of the Ganges is attracting foreign tourists to its entourage.

Sumit Kutani descended from the mountain of Uttarakhand and started playing foreign musical hand pens in the company of the British. As soon as Sumit’s fingers started moving on this foreign instrument, the foreign tourists started humming to his tunes.

Rishikesh. These days on the Ganges coast, the charm of the tunes of a foreign instrument hand pen (instrument like a flying saucer made of steel) is attracting foreign tourists in its entourage. Actually a native hill boy, who is called foreign Kutani Baba. He remains the center of attraction for the people by listening to the seductive tune with the hand pen. When he turns his finger on the hand pen on the Ganges coast of Rishikesh, a crowd of people gather around him. His real name is Sumit Kutani.

Rishikesh, which has a worldwide identity as an international yoga city, has been attracting music lovers from all over the world after the world famous band Beetle. Some such musicians arrived in Rishikesh with a hand pen from Switzerland. The Disney Doo, hand drum juggling with African drum jumbo remains a center of attraction for Indian tourists and locals.

Sumit Kutani, who came down from the mountain of Uttarakhand, started playing this instrument in the company of the British. As soon as Sumit’s fingers started moving on this foreign instrument, then the foreign tourists started humming to his tune. Sumit started showing wonders on hand pens and started practicing music everyday. Sumit got a new name among the British, Kutani Baba. Sumit, originally from Srinagar Pauri, went to Indonesia to learn this foreign instrument. From there, he has returned to India after learning the art of playing and making it.

Kutani Baba’s dream is that he can soon teach music to Indian music lovers. For this, he also wants to open Hand Pain Music Academy in Uttarakhand. Sumit says that the price of a hand pen comes to around one and a half lakh rupees. Soon he will start its construction in Rishikesh and bring its cost at very low prices. Hand pens emit 8 to 12 types of fumes, which sound like the Indian musical instrument watercolor.