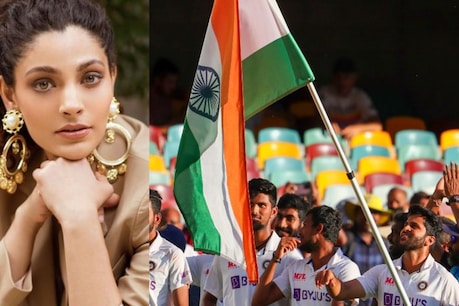 Saiyami Kher, who made his Bollywood debut with the film ‘Mirzya’, is also a sports lover.

Mumbai. The Indian Cricket Team has recently recorded a historic victory in Australia. Team India won the Border-Gavaskar Trophy after winning the four-match Test series 2–1 by defeating Australia by three wickets in a Test match played at the Gaba International Stadium in Brisbane. However, this victory did not look so easy, because many important players of the team were injured. The Australian cricket team suffered a defeat after 32 years at the Gabba International Stadium in Brisbane under Ajinkya Rahane. The news of this magnificent victory of India was spread on social media. Many people also advised to make a documentary about this victory, although no one has taken the initiative to make a documentary on this victory.

Actress Saiyami Kher, who made her Bollywood debut with the film ‘Mirzya’, has decided to write a book on Australia’s stunning victory. Sayami is also a sportsperson, she wanted to play for the women’s cricket team but she was not selected and she came to the movies.

According to the Times of India, Sayami said that she is still living the historic victory of the Indian team in Australia. Being a cricket lover and witness to this victory, I think I will write a wonderful book. In a match in which 11 fit players were difficult to meet, still the series should be won. This is nothing short of a surprise. No one believed that even after battling so hard, this team will achieve these magnificent victories, but Team India did it. This is what appealed to me the most that I should write a book on this victory.

Sayami says that the thought of not giving up till the last moment has impressed me the most. Sports means a lot to me. Even in my acting career is very helpful. Whenever I get upset, I take inspiration from the game itself. When the film ‘Mirzya’ was not successful in 2016, I went for a marathon. Sports teaches you to get up every time you fall. Teaches to trust oneself. I am also very excited and passionate about writing every moment of winning and losing in this book. It will be a fantastic human story. Because of being a sports background, Sayami has also talked to some of his close cricketer friends who were in this team. In his own words, his experience will be the main attraction of this book. The experience of players like Ajinkya Rahane, Rohit Sharma, Cheteshwar Pujara, Shardul Thakur, Mayank Agarwal, R Ashwin, Washington Sundar will be in this book. Sayami will also talk to Harsha Bhogle.

Cricket is considered a male dominated sport. Sayami says that men are dominated by playing and writing cricket, but our Indian women’s cricket team is playing very well and things are slowly changing. Saiyami shares her personal experience that in general people think what a girl would know about cricket but when they hear me speaking on cricket, they do not live without being impressed.