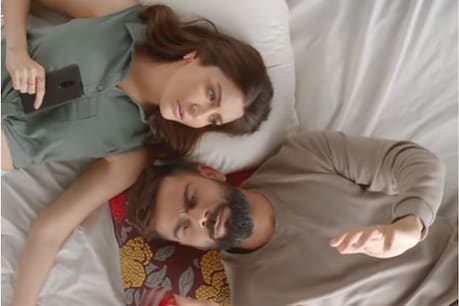 This Ed of a steel brand was released on YouTube last week, but it is likely that it was shot before Anushka Sharma announced her pregnancy in August. The pair has shot many eds for this brand before.

New Delhi Virat Kohli and Anushka Sharma have again appeared in a new TV commercial. As always, his chemistry is worth watching. This ed is for a steel brand. This is the first aid of Anushka Sharma and Virat Kohli after the birth of their daughter. In the ed, Anushka and Virat are shown planning a trip lying on the bed. Anushka is seen wearing a green top and white pants, while Virat is wearing a brown shirt and white pants. Anushka is finding out about the activities going on vacation on the phone, while Virat is playing with the red ball.

Anushka says that she should do bungee jumping and similar adventure activities, but Virat wants to spend time having fun on the beach. Anushka is irritated by his laziness and says that she will go out on adventure alone. Virat says, “My adventure will leave me.” Anushka laughs at this and starts thinking about another option, in which there is also the enjoyment of activities and a trip to the beach.

This ad was released on YouTube last week, but it is likely that Anushka was shot in August before announcing her pregnancy. The pair has shot many eds for this brand before. Anushka and Virat’s daughter was born on 11 January. Virat had released a statement from social media expressing his happiness.