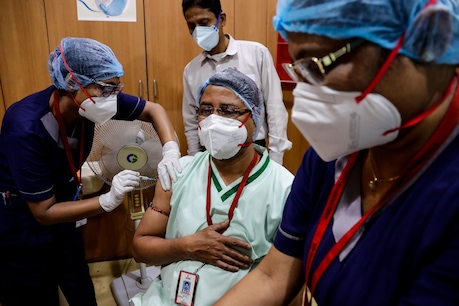 80% of the cost of the first phase of Kovid vaccination from PM Cares (Photo: AP)

PM-CARES Fund: The PM-CARES Fund has made a major contribution to the Kovid vaccination campaign. In its first phase, it has contributed Rs.2,200 crore, which is more than 80 percent of its cost.

new Delhi. The PM-CARES Fund has contributed Rs 2,200 crore in the first phase of the vaccination campaign. This is more than 80 percent of the cost of the first phase of vaccination. The expenditure secretary gave this information on Tuesday. The Prime Minister’s Fund (PM-Cares) was established in March 2020 during the Corona Virus epidemic to assist and relieve civilians in emergency situations. People and companies have voluntarily contributed to it. Although the information about how much has been collected in this fund has not been shared, but the people managing this fund in the Prime Minister’s Office say that the fund is helping the areas affected by the epidemic.

The budget for the current financial year was presented before the onset of the epidemic and there is no separate allocation for vaccination in it. In such a situation, during January to March, more than 82 percent of the cost of vaccination is being borne by the PM Cares Fund. Finance Minister Nirmala Sitharaman has earmarked Rs 35 thousand crore for Kovid vaccination in the budget of next financial year. Expenditure Secretary TV Somanathan said that in the current financial year, the cost of advance front and vaccination of health services personnel is being fully borne by the Central Government. This money is coming from PM Cares Fund and Ministry of Health.

Also read: Kovid vaccines have been administered to more than 41 lakh health workers in India: Government

ALSO READ: Hyderabad: Metro run with a beating heart, completed 21 km journey in 30 minutes3 crore people vaccinated from January to March
He said, “The cost of vaccination for January-March is expected to be around Rs 2,700 crore. A part of it is coming from the Ministry of Health and some part of it is funded from PM Cares Fund. This is for the first phase of vaccination of three crore people.

The secretary said that the entire cost of this round will be borne by the central government. He said, “We had provided additional funds to the Health Ministry for contingency costs of vaccination. We made an additional allocation of Rs 480 crore for three crore batches of vaccination. The remaining Rs 2,220 crore will come from the PM-Cares fund.