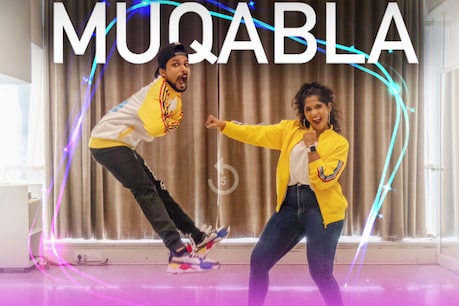 Jamie has shared many dance videos, which fans have liked very much. One of these Jamie Lever has done a wonderful dance on the ‘combat’ song, which the fans are very fond of.

new Delhi. Famous comedian Johnny Lever ‘S daughter Jamie Lever is known for her comic timing like her father. Jamie Lever is a standup comedian and her Comedy Is also vigorous like his father. Along with this, Jamie Lever is also fond of dancing. She also often shows her talent on social media. Jamie has shared many dance videos, which the fans have liked very much. One of these Jamie Lever has done a wonderful dance on the ‘combat’ song, which the fans are very fond of.

Choreographer Rajesh Jethwa is seen in this video with Jamie Lever. Both of them are quite tuning. This video has been watched more than 1.5 million times so far and they are getting a lot of fun comments from the audience. One fan commented, ‘You are a hundred times better than Alia, Ananya and other star kids.

In another viral video of Jamie Lever, she was seen mimicking many Bollywood celebrities together. In the video, Jamie is talking about the Corona vaccine. In this video, she is seen acting Sonam Kapoor, Kareena Kapoor, Farah Khan, Asha Bhosle and Kangana Ranaut. In the video, Jamie Lever is referring to ‘AK vs AK’, mimicking Sonam. Simultaneously, Kareena is talking about the photographers imitating Kapoor and Kangana is doing comedy about her tweets on Nepotism and Twitter, mimicking Ranaut. Jamie Lever is seen copying a lot of people in this video, seeing that people were laughing and laughing. The actress’ video has received millions of views. Let us know that Jamie Lever had earlier made a comedy video with her father Johnny Lever. Jamie Lever started her career in 2012 as a standup comedian. She has worked in Bollywood in ‘Kiss Kis Ko Pyar Karoon’ and ‘Housefull 4’. Jamie is also very active on social media.