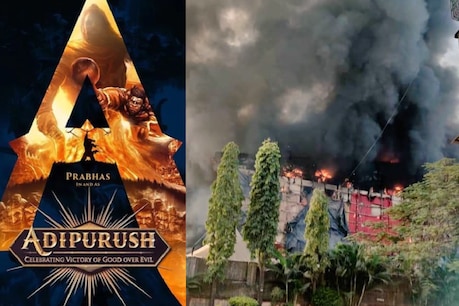 The incident took place just hours after the shooting of the film ‘Adipurush’ (Adipurush) began, though it is reported that director Om Raut and the film’s team are safe.

new Delhi. ‘Bahubali’ Prabhas And the audience is eagerly awaiting the release of Saif Ali Khan’s most awaited film ‘Adipurush’. At the same time, another incident took place on the set of this film today. On Monday, a fierce fire broke out on the set of the film’s shoot. According to media reports, the incident took place a few hours after the shooting started, although it has been told that director Om Raut and the film’s team are safe. There is no loss of any kind of life in this accident.

The fire was so fierce that the fumes of smoke could be seen in the video going viral on social media from far away. Many pictures are also going viral on social media along with videos from the set of this film. The studio is located near Mumbai’s Inorbit Mall. Eight fire engines reached the spot to control the fire. According to preliminary information, the cause of the fire is being told as a short circuit.