Akshay Kumar is in Jaisalmer in connection with shooting of Farhad Samji’s film ‘Bachchan Pandey’. At the same time, he met Indian cricket legend Shikhar Dhawan. Now a selfie of these two stars is becoming very viral on the Internet, which Shikhar Dhawan shared with his social media account.

New Delhi Recently, Bollywood player Akshay Kumar met Indian cricketer Shikhar Dhawan in Jaisalmer. These two expert celebs of their respective fields also took a selfie together, which is now going viral on the Internet. This selfie was captured by Shikhar Dhawan in his camera. The fans are getting special kindness on this special photo of Dhawan. Fans are making fun comments on both the stars.

In the selfie, both the stars are seen smiling along the lake. Akshay Kumar is seen wearing a brown T-shirt and a headband draped over his head, while Shikhar is wearing a red hoodie. Shikhar Dhawan wrote in the caption of the selfie, ‘It is always fun to meet you Paji, it was a nice meeting.’ A user commented on his post, ‘Bachchan Pandey’s meeting with Gabbar.’ 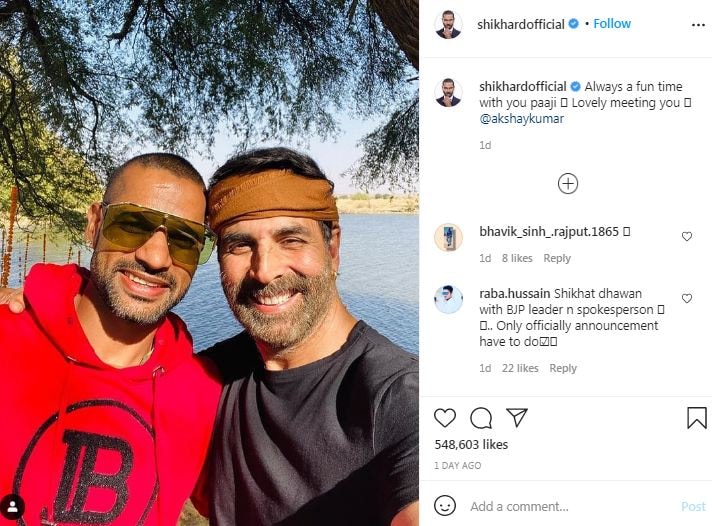 Akshay Kumar is in Jaisalmer in connection with shooting of Farhad Samji’s film ‘Bachchan Pandey’. The film is a Hindi remake of the 2014 Tamil film Veeram. In this, you will see Akshay in the role of a gangster. Apart from Akshay, there are also Kriti Sanon, Pankaj Tripathi, Arshad Warsi and Jacqueline Fernandes. Everyone has an important role in the film. In this, Kriti is shown in the role of a journalist. The shooting of the film was delayed due to the epidemic. Now this film will be released on 26 January next year. At this time, Akshay Kumar has many interesting films, including ‘Sooryavanshi’, ‘Raksha Bandhan’ and ‘Bell Bottom’.