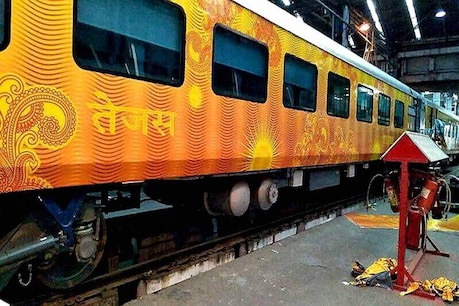 Today, Nirmala Sitharaman can make many announcements regarding railways

Rail Budget 2021: A proposal for 8000 km of high speed rail network has been proposed in the National Rail Plan 2024 issued by the Ministry of Railways. In such a situation, it is expected that the budgetary support for the railways will be increased this time.

Budget 2021: Finance Minister Nirmala Sitharaman (FM Nirmala Sitharaman) will present the budget 2021-22 in Parliament at 11 am on February 1. It is expected that in the budget announcements made for Indian Railways, there will be a lot of emphasis on Bullet Train Network for the country. Explain that while presenting the budget 2020-21, Finance Minister Sitharaman said that the central government is working fast on the Mumbai-Ahmedabad bullet train project.

Plan to finalize the National Rail Plan by January 2021- In December 2020, the Ministry of Railways introduced the National Rail Plan 2024 as a long-term strategy. The purpose of this plan is to increase the infrastructural capacity of the railway. Under this plan, maximum emphasis has been laid on the development of high-speed railway infrastructure in the country. The Railway Ministry has said that this plan will be finalized by the end of January 2021.

These bullet train corridors are mentioned in the draft NRP 2024- The draft National Rail Plan 2024 proposes to develop 8,000 km of high speed rail network in the country by the year 2051. This includes Varanasi-Patna, Amritsar-Jammu and Patna-Guwahati as well as some other bullet train corridors. Currently, there is only one under construction bullet train project in the country, which will connect Mumbai with Ahmedabad. However, the biggest challenge in this project is about land acquisition. Actually, there are many problems related to land acquisition in Maharashtra part of the project.Also read: Budget 2021: Why was the rail budget merged with the general budget? Know the reason

15 to 20 percent more budgetary support demand of Ministry of Railways In Budget 2021, the government’s focus will also be on increasing private investment in railways and increasing passenger safety. Railways has sought more budgetary support from the Finance Ministry for this. The Railway Ministry has sent a proposal for 15-20 percent more help. Explain that in the last budget, Railways received Rs 65,837 crore. The finance minister’s focus is on increasing private investment in railways. The budget will focus on promoting investment through private trains, Tejas trains. It is also possible to encourage private investment in station redevelopment in the budget. Announcement of construction of new bullet train corridor is also possible.