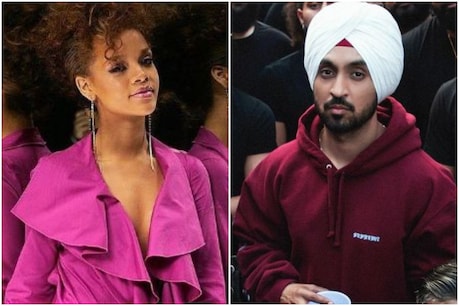 New Delhi On Tuesday, American pop star Rihanna reacted in support of the ongoing farmers’ movement in India. After this, the attention of many people went towards this popular pop star. Rihanna tweeted a news article of the farmers’ movement on February 2 and said that why are we not talking about it. Punjabi singer Diljit Dosanjh Rihanna’s move impressed her so much that she released a new song in her honor. Today he has released this song in his YouTube channel, titled – ‘Riri (Rihanna)’ (RiRi (Rihanna)). Diljit himself has sung this song, which has been composed by Raj Ranjodh and Intense.

Diljit himself has shared the YouTube link of this song from his Twitter account. Tagged the producer and lyricist of the song together. He wrote in the caption of his post, ‘#Riri #Rihanna.’ Diljit is thanking God for singing that he has created an angel like Rihanna. Diljit is expressing in the song that he wants to please this angel by giving him lots of gifts and he is crazy like the rest of the world. This song of Diljit is fast becoming viral.

Actress Kangana Ranaut, who had earlier waged a war with Diljit on the issue of farmer movement, did not miss out on this time too. Kangana tweeted on Diljeet’s new song and said, ‘He also has to make his 2 rupees, when is all this being planned. It will take at least a month in preparation for the video and announcement, and Liberu wants us to believe that this is happening in an organic way, haha ​​… ‘ Kangana Ranaut did not stop here only. He called pop star Rihanna stupid because of supporting the farmer movement. After this, Diljit also did not lag behind. He compared Kangana to the lizard. After this, Rihanna’s fans all over the world started trolling him. Today, Kangana is in the discussion due to his controversial statements. Recently, in his tweet, he had called the farmers agitating peacefully in Haryana as terrorists. After this, Congress MP Deepender S. Hooda demanded that his account be banned.

One thought on “Diljit Dosanjh released song in honor of Rihanna, Kangana Ranaut got angry”