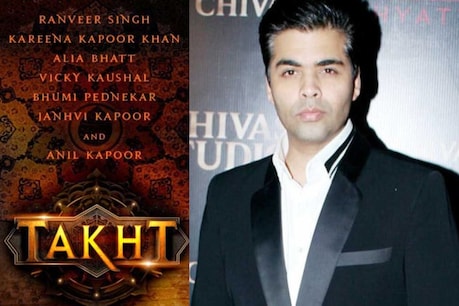 Work on ‘Takht’ will start soon.

Karan Johar has postponed his film ‘Takht’ based on historical war for some time. The star cast of this film are finalists and its shooting will start soon.

new Delhi. Film maker Karan Johar A good news is coming from the camp. The suspicion about the multi-starrer film ‘Takht’ is over. There is news of an agreement between Dharma Production and Like Production regarding this film production. With this, it has also become clear that work on ‘Takht’ will start soon. There were reports of the film Takht being closed for many big stars.

According to media reports, having an expensive film with a budget of about 300 crores was also believed to be the reason behind its closure. Like all producer directors and production company, Karan Johar suffered a lot of loss in the lockdown during Corona. Apart from this, many films were already in the lineup, in such a situation, Karan Johar had made up his mind to close ‘Takht’. But talking to ‘SpotBat’, Karan Johar put an end to all the speculation. Karan told that work on ‘Takht’ will start after some time, that is, it has been postponed at the moment but has not been stopped. This news has triggered a wave of happiness in the Dharma Production camp and people associated with the film.

Ranveer Singh, Alia Bhatt, Kareena Kapoor, Anil Kapoor, Janhvi Kapoor, Vicky Kaushal, Bhumi Pednekar will be seen in the film ‘Takht’. The film ‘Takht’ is the story of two brothers in the history of the Mughal period. Aurangzeb and Dara Shikoh were both sons of Shah Jahan. There is a war between these two to handle Shah Jahan’s legacy. Who won, who captured the Mughal throne, everyone knows it. But the story of a Mughal family will be presented to the audience in a different way from the film ‘Takht’. Karan Johar is currently completing films like ‘Brahmastra’, ‘Sher Shah’, ‘Dostana 2’, ‘Jug Jug Jio’ and ‘Shakun Batra’.