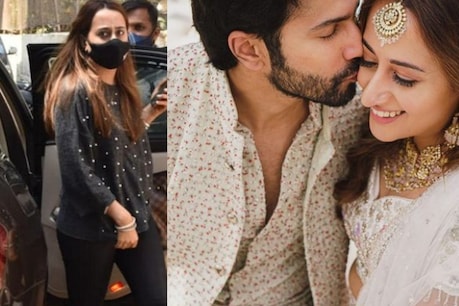 On January 24, Natasha Dalal and Varun Dhawan are tied in marriage.

After marrying Varun Dhawan, Natasha Dalal is seen alone in a public place for the first time.

New Delhi Fashion designer Natasha Dalal was spotted in Juhu, Mumbai for the first time after her wedding. During this time, Natasha was not accompanied by her husband Varun Dhawan. Newlywed bride Natasha Dalal was seen in black dress. He was wearing a black sweater with black pants and shiny sandals. When she was holding the phone in her hand, some photos of her were taken when she was getting out of her car, which is now going viral on the Internet.

After marrying Varun Dhawan, Natasha Dalal is seen alone in a public place for the first time. He was seen getting out of the car in a black dress. He was married to Varun on 24 January last month. In view of the corona epidemic, only a select few attended Varun-Natasha’s wedding, which included close friends besides family members. After getting married, Varun shared the first pictures of the wedding from his Instagram. He also shared pictures of mehndi and turmeric ceremonies with fans. Varun and Natasha are childhood friends. They know each other from 6th class. Natasha had once told in an interview how they met each other, then moved from friendship to dating. Natasha told that she and Varun used to study in school together. He was only a friend until he was 20 years old. They started dating each other before going away.

Varun also once said in an interview about Natasha, ‘I am with her, because she has her own personality. She is very strong about the things she wants to do. As a partner, this is something I want to support. When it came to my career, they also supported me.