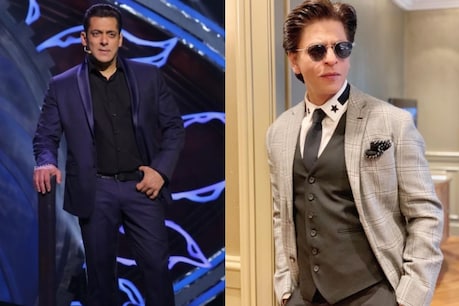 Both Salman and Shah Rukh are very happy to work together. (Instagram)

Shahrukh is busy shooting for the film. Recently, some pictures and videos were also leaked from the film’s shooting set, which became very viral on social media.

Mumbai. The craze of Bollywood movie Khan’s fans has not reduced even today. King Khan is returning on the big screen after 2 years. From the film ‘Pathan’ Shahrukh Khan (Shahrukh Khan) Ready to set fire among his fans again. These days the shooting of this movie is being done in Dubai. Deepika Padukone will be seen in the lead role alongside Shahrukh Khan in the film. Meanwhile, news is coming that Salman Khan’s name has also been included in the film’s cast.

According to media reports, for Khan, both Khan will be shooting till 15. Both Salman and Shahrukh are very happy to work together. In this film, Salman Khan will be seen in a special appearance in Detective Tiger’s avatar. Shahrukh khan is busy shooting for the film. Recently, some pictures and videos were also leaked from the film’s shooting set, which became very viral on social media.

Before this, Salman Khan played a cameo role in Shahrukh’s film Zero. At the same time, Shahrukh has also given a special appearance in the film ‘Tubelight’ in 2017. The film has been targeted to be released in the year 2021. In the film, Deepika Padukone is playing the role of an intelligence agent who meets Shah Rukh Khan on a mission. However, the film will revolve entirely around the character of Shah Rukh Khan. Earlier, these two pair have appeared together in Om Shanti Om, Chennai Express, Happy New Year. In this film, John Abraham will be seen playing the negative role. Shahrukh’s film is being directed by Siddharth Anand.