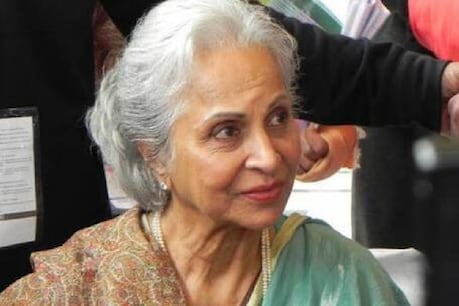 Happy Birthday Waheeda Rehman: Waheeda Rehman was born in Tamil Nadu. She is a trend Bharatanatyam dancer. Waheeda first wanted to become a doctor, but destined something else.

new Delhi. Veteran actress Waheeda Rehman Those who have created a different place on the silver screen with their stunning acting, are celebrating their 83rd birthday today. Famous actress Waheeda Rehman of her time started her film career with Telugu cinema. After this, he also did films in Hindi, Tamil, Malayalam and Bengali. There was a long time when Waheeda Rehman lived in the heart of every audience, from small to big. Even today, his fans praise his performance.

Waheeda Rehman Was born in Tamil Nadu. She is a trend Bharatanatyam dancer. Waheeda wanted to become a doctor first, but destined something else. She lost her father at an early age, after which she came to the movies to help the family.

Waheeda made her film debut with the Telugu film in 1955 and started her Bollywood career in 1956 with the Guru Dutt production of C.I.D. Had done Waheeda Rehman is still remembered for many films like Paper Phool, Sahib Biwi Aur Ghulam, Guide, Kala Bazar, Roop Ki Rani Choron Ka Raja, Ram Aur Shyam and Khamoshi. From these films, she came out as a unique actress.

In the film world, there are many such things which are always remembered while shooting. There are many such stories with Waheeda Rehman, whom she smiles remembering. Some time ago Waheeda Rehman came on TV show ‘The Kapil Sharma Show’ where she Amitabh Bachhan Rehman had to slap Amitabh while shooting for the film ‘Reshma Aur Shera’. Waheeda jokingly told Amitabh that I am going to slap you loudly and during the shoot he really slapped me. Due to Amitabh’s reaction, everyone present there understood that he had to slap loudly. Waheeda told that Amitabh came to me after the shoot and he said, ‘Waheeda ji was quite good’. Waheeda is a versatile actress who played almost all types of roles on screen. She played both mother and lover for Amitabh Bachchan.

Waheeda married herself in 1974 to star Shashi Rekha. Their two children, Sohail and Kashvi, are well-known writers of the film world. Waheeda’s husband Shashi Rekha died in 2000 after a long illness. Waheeda has been living the life behind the camera for some time now. She also does wild life photography.