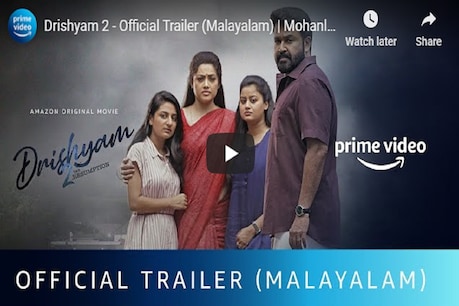 Amazon Prime Video has presented the trailer of the much-awaited Malayalam thriller sequel ‘Drishyam 2’ on Saturday.

Amazon Prime Video has released the trailer of Malayalam thriller sequel ‘Drishyam 2’ on Saturday. Mohanlal is playing the lead role in it. To be released worldwide on February 19, 2021, the film is written and directed by Jeetu Joseph.

Mumbai. Amazon Prime Video has released the trailer of the much-awaited Malayalam thriller sequel ‘Drishyam 2’ on Saturday. Mohanlal is playing the lead role in it. To be released worldwide on February 19, 2021, the film is written and directed by Jeetu Joseph. The film stars Meena, Siddiqui, Asha Sharat, Murali Gopi, Ansiba, Esther and Saikumar in central roles. ‘Drishyam 2’ has been produced by Antony Perumbadur under the banner of Ashirwad Cinemas.

The upcoming Amazon original movie, starting from where the first part of the film ended, increases curiosity and involvement with a more incisive and more thrilling plot. The trailer takes viewers into the murky world of George Kutty (Mohanlal’s character) and his family and shows how their lives changed completely after that disastrous night! This interesting, damaging and entertaining anecdote will not let fans sit comfortably in their seats, as the man who holds his house has once again begun to protect his family.

“Seven years ago, critics, fans and viewers rained upon us an immense amount of love and appreciation. We did not expect the film to get such an unprecedented response and it would achieve the status of cult. At the launch of the trailer, eminent actor Mohanlal told Said “Our goal with Drishyam 2 is to take this legacy forward and set up a new cinematic milestone. Drishyam 2 is not just a crime thriller with good vs evil. It is a story that is immersed in the feelings of George Kutty and his family, as well as an emotional journey that George decides to save his family at any cost. Over the years, the audience has sent us a lot of ideas and suggestions. I am happy to say that this episode of the film will finally reject all the guesses and we will answer all the questions. I am also happy that we are premiering Dishyam 2 on Amazon Prime Video, which will give viewers from all over the world a chance to watch this film sitting at home comfortably with their families.

Talking about his film, Jeetu Joseph said, “Drishyam 2 is very close to my heart. Encouraged by the positive thoughts and the overwhelming response, I thought many times about presenting this epic franchise again, but My thoughts always changed. Wherever I went, I was asked the same question whether we would come back with a sequel? I am thankful to Laletan for believing in me and turning my dream into reality. In front of my audience We have worked with deep passion, commitment and dedication to present this film, and now we are desperate to know their reaction. It is not my pleasure to join hands with Amazon Prime Video because their reach is tremendous. ” Regarding Drishyam 2, Amazon Prime Video India director and head, Contate Vijay Subramaniam stated, “Drishyam 2 is one of the most awaited films of this year and this film on Amazon Prime Video

We are very pleased to present the worldwide premiere. Both Mohanlal and Jeetu Joseph are stalwarts in their work and working together means entertaining our audiences across 240 countries and regions around the world! The only thing I can say at this crucial inference of the movie trailer launch is that the waiting clocks are finally over and we are all ready to welcome George Kutty and his family on February 19.