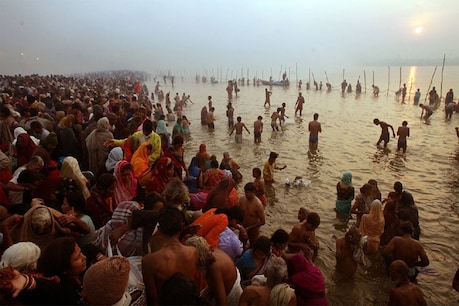 A roadmap has also been prepared to keep the crowd under control during Kumbh. (File photo)

During the event of Haridwar Kumbh there was no problem of any kind, so that the authorities chanted on Friday. During this time the roadmap was also prepared along with the new rules.

Haridwar. In order to keep the crowd of devotees at Haridwar Kumbh, administrative authorities have prepared a joint roadmap. Authorities of several states along with Uttarakhand churned at police headquarters on Friday for security, traffic and crowd management. It was decided in the meeting that VIP tour will not be allowed on the main bathing day in Haridwar Kumbh. Along with this, the police of all states will also give wide publicity to Kovid Guidelines. It will be mandatory for the devotees to put on masks and maintain social distance maintenance.

According to the information, a meeting held under the chairmanship of DGP Ashok Kumar, Uttar Pradesh, Delhi, Haryana, Himachal Pradesh, Punjab, Rajasthan, Chandigarh, Jammu and Kashmir as well as a joint meeting of officers of NIA, IB, Railway Protection Force was held. In this meeting, a special palan was prepared to keep the crowd completely under control. It was decided in the meeting that no VIP will be allowed to visit Haridwar on the day of the main bath. If VIPs want to come for bath as a protocol normal traveler can come. After the meeting, DGP Ashok Kumar said that this time the police is using CCTV cameras, drones as well as Artificial Intelligence tool for crowd management and security system.

This time in the meeting, a plan was also prepared regarding the usefulness of social media in Kumbh. Monitoring of social media is also being increased. IG Kumbh Sanjay Gunjyal and IG Intelligence AP Anshuman informed about the arrangements being made for major baths.

Many decisions taken in the meetingThe officials of many states took several important decisions after serious discussion about crowd management regarding Kubh Snan. In it, the increase in traffic pressure was said to diversify itself from the neighboring states. Along with this, forming a common WhatsApp group of officials of all states. Enabling Najibabad, Saharanpur railway station to increase congestion. During Kumbh, it was decided to make common frequency of wireless between states, sitting in Haridwar of all state and central agency nodal officers, parking information on Facebook page, Twitter handle.