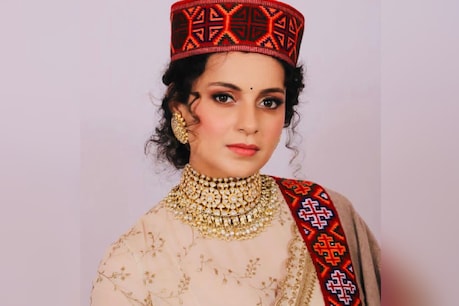 Mumbai. Bollywood actor Kangana Ranaut is very active on social media. On every issue, she shares her opinion on social media through tweets. Kangana also expressed her opinion about the farmers, then Madhya Pradesh (Madhya Pradesh) Congress leader and former MP Sukhdev Panse tweeted by tweeting that Kangana was a ‘dancing song’. On Twitter, Kangana responded to that comment of Congress leader Sukhdev Panse. Kangana has addressed her as a ‘fool’ in her post.

Actually, Kangana Ranaut is currently shooting for the film ‘Dhakad’. There were also threats to agitate to stop the shoot of ‘Dhakad’. Sukhdev Panse, who was a minister in the Kamal Nath government in Madhya Pradesh in the last day due to the tweets about the farmers’ movement, called Kangana extremely bad. In his statement, he also called Kangana a ‘dancing girl’, to which Kangana tweeted in a retort.

He wrote in tweet- ‘Whoever is an idiot does not know that I am not Deepika, Katrina or Alia Bhatt … I am the only one who refused to do the item number. I refused the film with the elder hero (Khan / Kumar), because of which the entire Bullywoodiya gang men and women have turned against me. I am a Rajput woman, I do not move my waist, I break bones’. Kangna’s tweet is becoming viral on social media. Kangana has received tight security after Kangana’s threat and her film is being shot there.

Talking about the film ‘Dhakad’, this is a spy thriller film, in which Kangana played the role of Agent Agni. Arjun Rampal is in the role of Rudraveer. Rajneesh Raji Ghai is directing the film, which will be released on October 1. Apart from ‘Dhakad’, the actress is also working in ‘Thalaivi’ and ‘Tejas’. Kangana will also make her directorial debut with her film Aparajita Ayodhya.