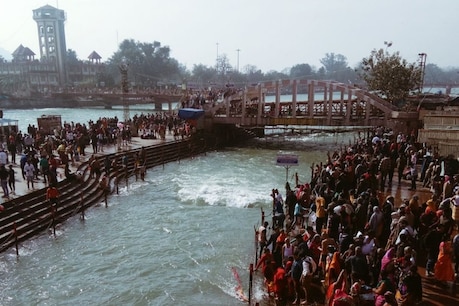 Devotees will have to strictly follow the Standard Operating Procedure (SOP) issued by the central and state governments for Kumbh. (File photo)

Chief Minister Trivendra Singh Rawat gave. He said that the saints of Haridwar were taken into confidence before taking a decision.

Dehradun. Kumbh Mela will be held in Haridwar from April 1 and it has been decided to limit its duration to 28 days in view of the corona virus epidemic. This information was given by Chief Minister Trivendra Singh Rawat here on Friday. He said that the saints of Haridwar were taken into confidence before taking a decision. Devotees will have to strictly follow the Standard Operating Procedure (SOP) issued by the central and state governments for Kumbh.

According to the SOP, devotees will be allowed to attend the Kumbh only if they present a negative report of the corona virus that was not released before 72 hours of their arrival. Rawat said that notification will be issued soon. For the first time Kumbh is being held for such a short time. Earlier Kumbh used to run for more than four months. Three royal baths will take place from April 1 to April 28. The first royal bath will take place on 12 April (Somvati Amavasya), the second on 14 April (Baisakhi) and the third on 27 April (Poornima).

It will be mandatory to maintain social distance maintenance
At the same time, there was news yesterday that a joint roadmap has been prepared by the administrative authorities to control the crowd of devotees in Haridwar Kumbh. Officials of several states along with Uttarakhand churned at police headquarters on Friday for security, traffic and crowd management. It was decided in the meeting that VIP tour will not be allowed on the main bathing day in Haridwar Kumbh. Along with this, the police of all states will also give wide publicity to Kovid Guidelines. It will be mandatory for devotees to put on masks and maintain social distance maintenance.Is also using intelligence tool
According to the information, a meeting held under the chairmanship of DGP Ashok Kumar, Uttar Pradesh, Delhi, Haryana, Himachal Pradesh, Punjab, Rajasthan, Chandigarh, Jammu and Kashmir as well as a joint meeting of officers of NIA, IB, Railway Protection Force was held. In this meeting, a special palan was prepared to keep the crowd completely under control. It was decided in the meeting that no VIP will be allowed to come to Haridwar on the day of the main bath. VIPs can come as protocols if they want to take bath as normal passengers. After the meeting, DGP Ashok Kumar said that this time the police is using CCTV cameras, drones as well as Artificial Intelligence tool for crowd management and security system.