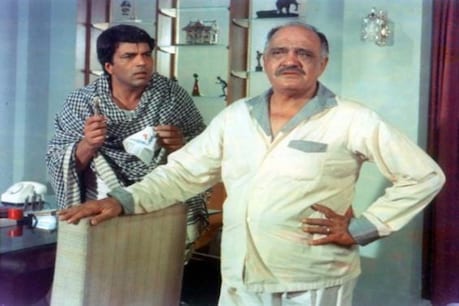 Om Prakash with Dharmendra in a scene of the film Chupke Chupke. (Youtube Video)

New Delhi. There are some actors who make a place in the hearts of people with their acting. One such actor is Om Prakash. You may not remember his face by name, but by seeing his picture, you must have understood who we are talking about. Om Prakash (Om Prakash) has done a great job in films like ‘Chupke-Chupke’, ‘Chameli Ki Shaadi’, ‘Padosan’, ‘Namak Halal’. He was the lover of Hindi films in the 60s and 70s.

Om Prakash (Om Prakash) acted in more than 300 films. Along with acting, he also directed and produced films. Born on December 19, 1919, Om Prakash left the world on February 21, 1998 (Happy Birthday Om Prakash). He was fond of music, theater and films since childhood. From the age of 12, he started training in classical music. Also he used to participate in many plays. He played the role of Kamala in the famous drama of Dewan Temple drama Samaj Jammu.

In the year 1944, he got his first film. Filmmaker Dalsukh Pancholi saw Om Prakash at a wedding. He offered them and called his office in Lahore. There he offered her the film ‘Maid’. His programs as ‘Fatehdeen’ were very popular all over Lahore and Punjab.

Om Prakash was known for his comic role in Bollywood. They made a million, Annadata, Charandas, Sadhus and Satan, Dil-Daulat-Duniya, Apna Desh, Chupke-Chupke, Julie, Joru’s slave, Aa hug ja, Love be made, Neighborhood, Old man found, drunk, trusting, In front of your house, I worked in films like Mere Hum-Dum Mere Dost, Lofar, Dil Tera Deewana. Apart from this, he has also produced films like ‘Gateway of India’ (1957), ‘Sanjog’ (1961) and ‘Jahan Aara’ (1964). Om Prakash may not have had a shortage of work in films but at one time It was also when, at the age of 14, he agreed to work for 30 rupees a month. Also, his love story was also very funny. Sharing an anecdote, he said that I fell in love with a Sikh girl, but the girl’s family members were against me because I was a Hindu. My mother also went to his house to talk. But his family members do not believe. After which we decided to split up.