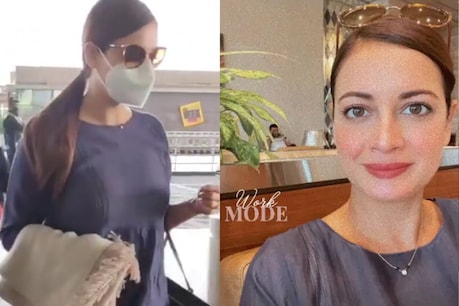 Mumbai Bollywood actress Dia Mirza has recently got married to businessman Vaibhav Rekhi. This is Diya and Vaibhav’s second marriage. Dia Mirza took seven rounds in the presence of very few people (Dia Mirza Viabhav Rekhi Wedding). Meanwhile, their wedding photos and videos were discussed. Everyone became a fan of Dia Mirza as a bride in a red colored saree. Now after their wedding pictures, there is another thing which remains in the discussion and this is their Mangalsutra.

Recently, Dia Mirza was spotted at the airport for the first time after her wedding, where the actress appeared in a blue kurta. During this time, everyone’s eye rested on Mangalasutra with their cute. In the video, Diya was seen wearing a small but beautiful and different mangalsutra. No one is able to stop himself from praising it. At the same time, Diya also shared one of her selfies, in which this Mangalasutra was seen.

While commenting on this video of Dia Mirza, everyone is praising his mangalsutra and at the same time many people asked him even the price of his mangalsutra. It is known that on 15 February, Dia Mirza got married with Mumbai based businessman Vaibhav Rekhi. Apart from his family and close friends, few people attended his wedding. In which the name of Bollywood actress Aditi Rao Hydari was also included.