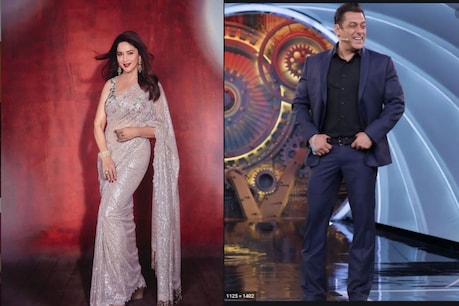 Bollywood star actress Madhuri Dixit is going to have a big bang on the stage of Bigg Boss 14. Madhuri will be seen in the grand finale of this show promoting Dance Deewane 3.

Mumbai. Bigg Boss 14 winners are all over the country. In a few hours, it will be clear who will take the Big Boss trophy this time. Now, different types of news are coming out about Finale. In such a situation, according to media sources, on the stage of Bigg Boss, the girl Madhuri Dixit is reaching to increase the beating of people.

The makers of Bigg Boss are leaving no stone unturned to make the finale of Bigg Boss 14 full of thrills. In such a situation, the news of Madhuri Dixit’s arrival has doubled the enthusiasm of the audience. Madhuri’s arrival is also important for the finalist contestants, as it is getting news that Madhuri Dixit is going to reveal the names of the four finalists.

Currently, Rubina Dilaik, Rakhi Sawant, Ali Goni (Aly Goni), Rahul Vaidya and Nikki Tamboli at the house of ‘Bigg Boss 14’ five Contestants have reached the final stage. It is getting news that with the entry of Madhuri Dixit, one of these five finalists of ‘Bigg Boss 14’ will be out. In this way, the top 4 finalists of the show will be found on the last occasion.Show host Salman Khan and Bollywood actress Madhuri Dixit have done many super hit films together. In which viewers still remember the chemistry of films like ‘Hum Aapke Hain Kaun’, ‘Saajan’, ‘Dil Tera Aashiq’ and ‘Hum Tumhare Hain Sanam’. If these stars are on the stage together, there is no fun and shock, it cannot happen.