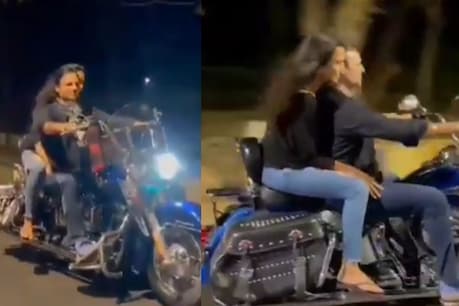 After the challan was cut, Vivek Oberoi tweeted on Saturday and thanked the police. (photo credit: instagram / @ viralbhayani)

Mumbai. Valentine’s Day 2014 (Vivek Oberoi) will hardly be forgotten. He too probably did not know that he would get into trouble due to a ride. Actually, a video is going viral on social media, in which actors are seen violating traffic rules. This video was shared by the actor himself on his Instagram, after which the Mumbai Traffic Police took an action against the actor and invoiced him. Vivek’s reaction has come to light after this challan.

Actually, Vivek Oberoi in the video went on a ride with wife Priyanka Alva Oberoi on her new bike. But during this ride, he was not wearing a helmet and a mask, the traffic police cut the challan as the rules were violated. His reaction has come to light after this challan. Vivek has tweeted, in which he has thanked the police for this. Actor Vivek Oberoi tweeted and wrote – ‘Love brought us at what point! We and our lives were left on the new vike, the invoice was cut without a helmet! Mumbai Police will get caught driving a bike without a helmet. Thank you Mumbai Police, for making me realize that security is most important. Be safe, wear a helmet and a mask. ” In the viral video, he is seen riding bikes on the streets of Mumbai at night. However, neither he nor helmet nor mask are seen in it. At the same time, the music of his film ‘Saathiya’ is also heard in the background.

Let us tell you that after the video surfaced, the traffic police have taken action against them under sections 188, 269 of IPC, section 129, 177 of Motor Vehicle Act and Section of Academic Act and also challaned 500 challan for driving without helmet bike. is.