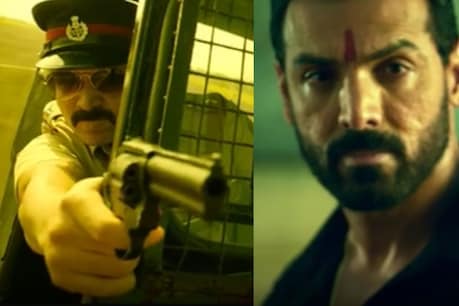 In this action-packed film, John is playing the role of a goon. Imran, the police officer there. Photo courtesy- Video Grab

Mumbai Saga Teaser: Seeing the film ‘Mumbai Saga’ teaser, it is known that there will be a full blast of action in the film. The film is scheduled to be released on 19 March 2021 in Theaters.

Mumbai. The underworld crime-based film ‘Mumbai Saga’ in Bollywood has been in discussion for quite some time. The Mumbai Saga Teaser Out of the upcoming film ‘Mumbai Saga’ by John Abraham and Emraan Hashmi has been revealed. In this action-packed film, John is playing the role of a goon. At the same time, Imran police officer. The teaser is very bang and fans are getting excited to see the film.

Seeing the teaser of the film ‘Mumbai Saga’, it is known that in the film, you will get a full blast of action. The film is scheduled to be released on 19 March 2021 in Theaters. Sharing the teaser, John Abraham wrote, when Bombay was not Mumbai, and there was a reign of violence in the streets. Get ready for the biggest saga of the year. All theaters in Mumbai will be released on March 19.

In this film, apart from John Abraham and Emraan Hashmi, a lot of big stars are going to be seen in the film. Many actors including Sunil Shetty, Kajal Aggarwal, Rohit Roy, Prateek Babbar, Gulshan Grover, Sameer Soni, Mahesh Majhrekar will be seen in this film. The Mumbai Saga is directed by Sanjay Gupta. This film will show the gangster story which fans will get to see 80-90 sets, scenes and style. The first news about the film was that the Mumbai Saga will be released on the OTT platform and the rights of the film have been sold to Amazon Prime. Not only this, it was also said that the deal was signed for 65 crores, in which the rights to the music along with the story Are also included. But now it has been confirmed that the film will be released not on OTT but on theater.

Let us tell you that after the huge loss to the box office in the year 2020, this time the box office is ready for full entertainment. Release dates of several films have been revealed one by one.