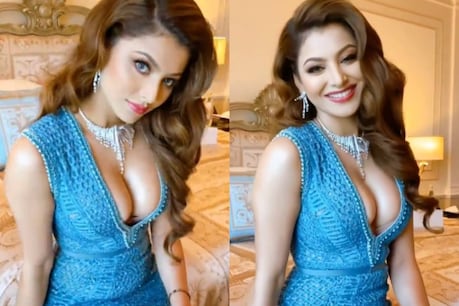 So far this video has been viewed more than 50 lakh times. (Instagram Video Grab)

Urvashi Rautela’s videos are being liked by people on Instagram. So far this video has been viewed more than 50 lakh times.

New Delhi. Bollywood actress Urvashi Rautela A video of this is going viral on social media these days, in which she is seen in a very bold style. In this video, Urvashi is seen in a blue color dress and posing on the bed in front of the camera. People are very fond of this video on Instagram. So far this video has been viewed more than 50 lakh times. This video was shared by Urvashi herself on her Instagram account last month.

Let me tell, Urvashi remains very active on Instagram and keeps sharing her photos and videos. Urvashi will soon be seen in her most awaited web series ‘Inspector Avinash’, based on the real-life story of super-police Avinash Mishra. Randeep Hooda is going to be seen with Urvasi in this web series. The series is being produced under the banner of Jio Studios and is directed by Neerja Pathak.

It is believed that Urvashi will play an important role in this series which furthers the story. Recently, Urvashi had informed on her Instagram that the first schedule of this web series is over. Let me tell you, Urvashi Rautela has made the country proud for being the first Indian in the ‘World’s Top 10 Sexiest Supermodels’ in particular. This list also includes Irina Shayk, Sara Pinto Sampao and other similar international supermodels.