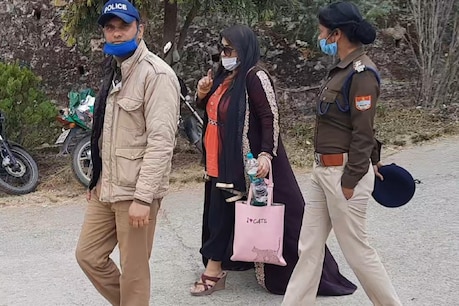 After the bail was rejected, a woman of Pakistani origin was arrested from Noida.

Farida Malik, who is on bail, has been arrested by the Champawat police from Noida. The court of the Chief Judicial Magistrate has retained his 4-year rigorous imprisonment.

Champawat In July 2019, the appeal of a Pakistani-origin American woman caught on a Banbasa Border without a passport, a visa (Visa) has been dismissed. Farida Malik, who is on bail, has been arrested by the Champawat Police from Noida in UP. The court of the Chief Judicial Magistrate has retained 4 years rigorous imprisonment under the Foreigners Act and the Passport Act.

According to Champawat SP Lokeshwar Singh Chauhan, Farida Malik was arrested on 12 July 2019 from near the international border in Banbasa. On 5 March 2020, the CJM court found Farida guilty and sentenced him to 4 years rigorous imprisonment. He was lodged in Almora Jail. Farida was later granted bail by the High Court. After this, Farida challenged the order of the CJM in the District Court. On 22 February, the District Court dismissed Farida’s plea and dismissed her bail. Also, NBW was issued against him.

Banbasa police station arrested Farida on Friday evening from Sector-18 of Noida, which has now been sent to Lohaghat jail. Significantly, the Banbasa area along the Indo-Nepal border has always been sensitive. Statistics show that during the last 2 years, 9 foreign nationals have been caught during illegal infiltration. The people caught are of Pakistani origin, Chinese and Tibetan. On 1 May 2019, the SSB caught an Israeli citizen without a visa on the Banbasa border. On 27 July 2019, a Tibetan citizen was caught with 4 Chinese nationals without a visa.