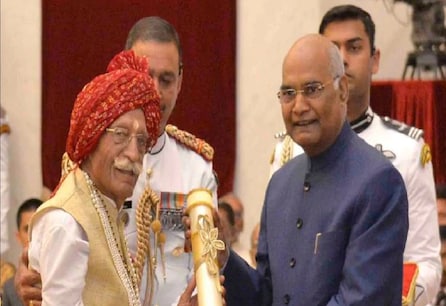 Dharampal Gulati is a name that we can remember every day, all the time. Starting from zero in his life, the life of Masala King, who reached the summit, is a source of inspiration.

New Delhi. A brand that has been making our food tasty for years. Not only this brand, India is ruling the kitchens of millions and millions of people living in many parts of the world. Whenever you go to your kitchen, a packet of spices will be seen, on which a picture of an old person in a red turban can be seen. Yes! We are talking about MDH Masala and its founder Mahashay Dharampal Gulati. Dharampal Gulati is a name that we can remember every day, all the time. Starting from zero in his life, the life of Masala King, who reached the summit, is a source of inspiration. No special day is needed to remember them. So let us tell you today about the famous businessman Dharmpal Gulati from ‘Pillars of Memories’.
Story of becoming a famous brand from a small shop…

From a small shop in Delhi, ‘Mahasya’ Dharampal Gulati gave MDH the brand of India’s major spices. In 1953, he rented a shop in Delhi’s famous Chandni Chowk, named Mahashian Di Hatti (MDH). From this shop, he started selling spices. He then bought land in Kirti Nagar to set up a manufacturing unit. Currently MDH, which manufactures about 50 different types of spices, has 15 factories across the country and sells its products worldwide. Today, machines in MDH factories can produce more than 30 tonnes of spices in a single day.

Also read – Invest in PPF, get more interest with tax rebate, learn other great benefits ..Highest paid person
Later many products including their spices, rice and cloth started being sold all over the country. MDH spices are exported not only in the country but also abroad. In the year 2017, Masala King was the CEO of Consumer Goods Product Company, which received the highest salary. Monsieur Dharampal Gulati was India’s oldest rich man in the IIFL Hurun India Rich List in 2020. The wealth of MDH starting from Rs 1500 is more than 5400 crores in today’s time. In 2019, the Government of India awarded Gulati the Padma Bhushan, India’s third highest civilian award.

90 percent of the salary was donated

Gulati donated about 90 percent of his salary to the Mahasani Chunni Lal Charitable Trust. The trust runs a 250-bed hospital in Delhi as well as four schools and a mobile hospital for slum dwellers. In April 2020, he donated 7,500 PPE kits to health workers fighting COVID-19. Gharmapala Gulati was very fond of some things. He loved pigeonholing, wrestling and kite flying. He was fond of Punjabi mines. He was also fond of the world’s most expensive cars and his car collection has many luxury cars present. He has a Rolls-Royce Ghost car worth 7 crores in his collection. Apart from this, there are famous expensive cars like Chrysler 300C Limousine, Mercedes-Benz M-Class ML 500, Toyota Innova Crysta. Apart from this, many brands of cars including Handa and Toyota are in their car collection.

Also read – Good news: if you travel by air without a check-in bag, you will get a cheaper ticket, know what the DGCA said?

Died on 3 December 2020 at the age of 97
Born in Pakistan, Gulati, popularly known as ‘Mahashay’, was born in 1919 in Sialkot. This city is today in Punjab, part of Pakistan. His father started a small shop there. But after the partition in 1947, his family moved to India. His family moved to Delhi. However, before coming to Delhi, he also lived in the Refugee Camp in Amritsar for some time. Gulati used to run a tonga here. Dharmapala died on 3 December 2020 at the age of 97.