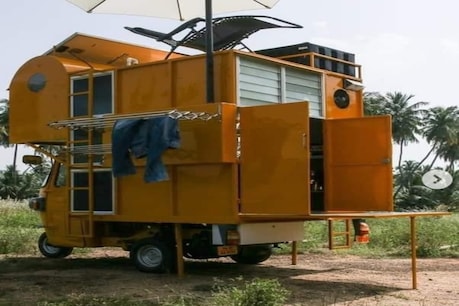 Luxurious house built in auto for one lakh rupees.

Luxurious House: Only 1 lakh rupees have been spent to build this house. At the same time, Arun Prabhu has also installed solar panels to meet the energy needs in this house. Those who provide the needed electricity to this house. Along with this, a water tank has been fitted in this house.

New Delhi. People always wish that they have a luxurious house. People spend lakhs of rupees for this. But there is also a person in the world who has built a luxurious home by spending only 1 lakh rupees. When Anand Mahindra came to know about this, he could not keep on praising it and he praised that person on social media and even invited him to convert Mahindra Pickup and Bolero into a luxurious house in a similar manner.

Who built auto in-house A person named Arun Prabhu of Chennai has built a luxurious house in his auto. Which has all the facilities needed. There is a lot of space in this luxurious house and there is also a good arrangement of ventilation. Along with this, Arun has provided windows and doors as well as drying clothes on the roof. Mahindra & Mahindra Chairman Anand Mahindra has also shared photos of Arun’s art on his Twitter account. By looking at them, you can understand that how luxurious a house built in an auto will be.

Apparently Arun did this to demonstrate the power of small spaces. But he was also on to a larger trend: a potential post-pandemic wanderlust & desire to be ‘always mobile.’ I’d like to ask if he’ll design an even more ambitious space atop a Bolero pickup. Can someone connect us? https://t.co/5459FtzVrZ

In his tweet, Anand Mahindra wrote- Sharing the post, Anand Mahindra wrote on Twitter that Arun has shown the power of less space through it. Which can become a big trend for people fond of walking after the Corona period. He further wrote that he would be happy if Arun Bolero could make something like this at the top of the pickup. Along with this, he has also asked people to contact him with Arun.