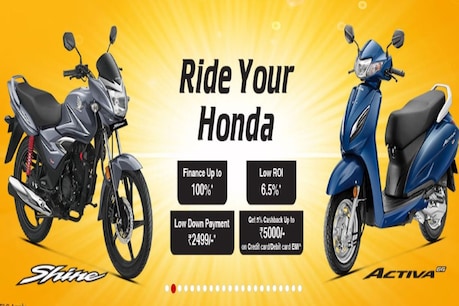 Honda Shine and Activa are getting great offers.

The Honda Shine and Activa two-wheeler can be taken home at a down payment of only Rs 2499. Apart from this, you are also getting 100 percent finance offer on both these vehicles. On which you only have to pay interest at the rate of 6.5 percent.

New Delhi. The country’s famous two-wheeler manufacturer, Honda has brought great offers on its most popular bikes and scooters. According to Honda, you can take the Honda Shine and Activa two-wheeler home at a down payment of only Rs 2499. Apart from this, you are also getting 100 percent finance offer on both these vehicles. On which you only have to pay interest at the rate of 6.5 percent. On the other hand, if you pay by debit or credit card, you can get a cashback of up to 5 thousand rupees. Let’s know about them …

The Honda Activa 6G 20 Special Edition gets you a full-LED headlamp (DLX variant), an external fuel filler cap, and an analog instrument cluster. The Honda Activa Special Edition has the same 110cc, fuel-injected engine as the current Activa 6G which generates maximum power of 7.68bhp and peak torque of 8.79Nm. It has tubeless tires with drum brakes. The scooter gets LED headlamps with self-start, double lid external fuel fill and telescopic suspension.Also read: Driving License News: Making a driving license from March will be in these states and easy, no longer will have to wait for DL.

The specialty of Honda Shine- Honda’s Shine’s drum variants and disc variants are priced at Rs 68,812 and Rs 73,512 respectively. The company has a single cylinder and air cooled system in the Honda Shine. Apart from this, 125cc HET motor has also been given in this bike, which generates power of 10.59hp and torque of 11Nm. A 5 speed gearbox has also been given in the Honda Shine’s engine. According to media reports, Honda says that the Honda Shine BS6 model has increased the mileage by 14 percent. According to media reports, the throttle response of the bike has become accurate due to having a good fuel injection system.