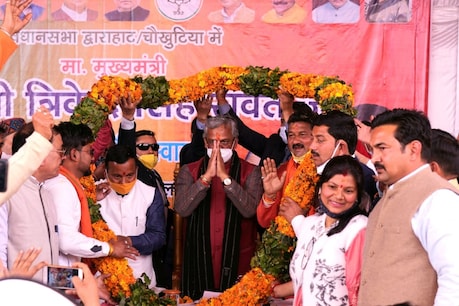 Almora Uttarakhand Chief Minister Trivendra Singh Rawat has given a big statement regarding the creation of districts in the state. CM Rawat, who visited the Almoda district for two days, said that at present, new districts will not be formed in Uttarakhand. After visiting Hadikhan Temple of Ranikhet in Almora, CM reached Dwarahat by road, where BJP workers gave a grand welcome to CM. Here, the CM will meet the workers and the public for two days.

CM Trivendra Singh Rawat said that there is no plan to create new districts in the state yet. The aim of the government is to develop in the state. He said that in order to know the public’s problem, I sometimes walk on the road or sometimes on foot.

CM Trivendra Singh Rawat said that the postponement of the District Development Authority had been announced from Almora, but due to some technical problems, time is taking place. But some solution will be found soon so that the people of the state do not face any problem. There are some problems in taking loans in the bank as well.

Railway Minister flagged off Purnagiri Jan Shatabdi, construction of new line from 4200 crores to Rishikesh-Karnprayag in Uttarakhand
CM counts the merits of the government

CM addressed a public meeting in Dwarahat today and said that the state government is working for women. The government is working for all classes. Roads have done better in health in the last four years. CM said that on coming by road, the real development situation is known. Public opinion can also be known if some districts are visited by road before going to Garsain session.