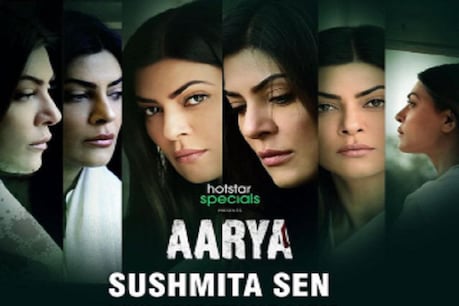 Sushmita Sen made her digital debut with Arya and also received the Filmfare OTT Award for Best Actress. (@ madhvaniram / Instagram)

Aarya Webseries streamed on Disney Plus Hotstar was very liked by the audience. After watching the first season, the fans started waiting for its second season. Sushmita Sen has made it clear that this is going to be the second season of Arya Webseries.

Mumbai. If the year 2019 is called the year of the OTT platform, it will not be an exaggeration. In 2019, theaters were closed for months from March. Due to this, the audience who entertained themselves with films had the support of the OTT platform only. This year, more than one web series and films were released on OTT. Arya and Mirzapur are prominent among the hit webseries of that year.

On Thursday, Sushmita has posted a post on Instagram. Only his eyes are visible in the post. In this caption, she has written – She is seeing the storm coming in the mirror … Arya season 2. Your wish is the order for us. Friends, I love you He has written the tag of Ram Madhvani, Director of Webseries – Come, let’s do it. Ram Madhwani wrote on this post- Welcome Arya on return. In a live chat session in July 2021, Ram Madhwani was asked by a fan about making Arya’s second season, he gave a positive response.

Arya is the Hindi remake of the Dutch drama series Penoza. Its story was filmed in Rajasthan. The climax of the first season was such that every audience wants to know the story ahead of it. The climax showed that Arya leaves the country with her children after dealing with enemies, but is yet to deal with the international mafia. Sushmita Sen made her digital debut with Arya and also received the Filmfare OTT Award for Best Actress. Was Arya season 1 was streamed on Disney Plus Hotstar on 19 June 2020, it had 9 episodes. In this webseries, along with Sushmita Sen, Chandrachud Singh, Namit Das, Sikander Kher, Ankur Bhatia, Manish Chaudhary, Vishwajit Pradhan also played their roles.