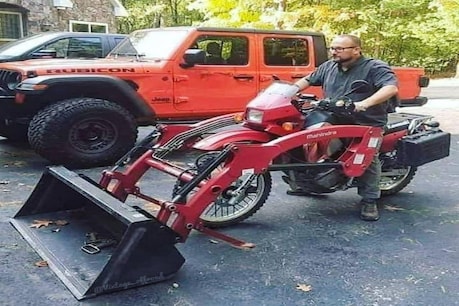 Mahindra loaders are used to load goods into trucks or mini tampos.

New Delhi. India’s sting also rings because of jugaad all over the world. The whole world knows the work that cannot be done with any technique or skill. We complete it with Indian jugaad. Which also has many examples in India. Perhaps you have ever used jugaad to fulfill any need or you have seen something happening around you which is completely based on jugaad.

But now Anand Mahindra is fearing that the title of Jugaad should not be snatched away from India. The biggest reason for this has been shared by Anand Mahindra on his Twitter account. In which he has written that, ‘A friend of mine from America has sent this photo to me, seeing that we may be in danger of losing our title of Jugaad Champion’.

Forwarded to me by a friend in the U.S. we may be in danger of losing our title of ‘Jugaad’ champions!This gent seems to have hooked a Mahindra loader attachment to his bike! Need to see it in action, but it could actually turn out to have applications out here… pic.twitter.com/C5y0MC87TQ

Let me tell you, the Mahindra loader is used to load goods into trucks or mini tampos. It is mostly used for loading sand or garbage.