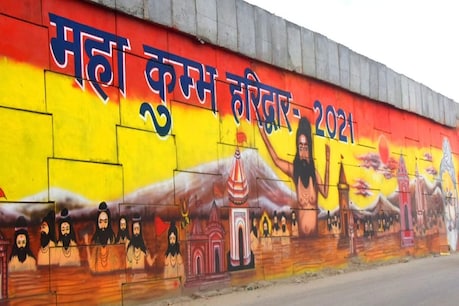 Haridwar Kumbh: Terrorists will be caught as soon as they enter the campus, surveillance will be done with the Authentic Intelligence System

Hightech arrangements have been made for security in Haridwar Kumbh, one of the biggest events of the country. In order to prevent criminal and terrorist incidents, the help of Authentic Intelligence Software is being taken.

Haridwar. Police has made elaborate arrangements for the security of Haridwar Kumbh Mela (Haridwar Kumbh Mela). Amidst the challenges of keeping the crowd of devotees arriving here completely under control, the police administration is also keeping an eye on criminal activities. In the biggest event of the state, she does not want to take any risk and with this, the help of Artificial Intelligence Software will be monitored by terrorists and criminals. With the help of this software, as soon as any suspected or big criminal enters the fair premises, he will immediately come on the radar of the intelligence police. In the blink of an eye CCTV cameras will scan his photo and send an alert to the police. After this, the police will immediately ensure his arrest.

According to the information, the police is very cautious with respect to the Kumbh Mela. The first challenge is to keep the crowd under control. In this regard, the police officers of many states have planned to coordinate and keep a watch on the devotees at their respective borders. Along with this, the second biggest challenge is to organize the fair in a peaceful manner, on which the police officer will also keep an eye on the terrorists and vicious criminals. Digital security cycle has been prepared for this. The help of Artificial Intelligence Software is being taken in the fair. With the help of this, photo of terrorists will be uploaded in many CCTVs. With this, the police will get information about this immediately after the terrorists arrive in the Kumbh region. The police officer who arrived there will surround Atanki and arrest him. Photographs of many big criminals have also been loaded in it. It has been told that a list of suspicious people has been prepared regarding the security system. The police is keeping a close watch on anti-social elements. Artificial intelligence software will be uploaded to CCTV cameras.

528 history sheets will be monitored
In order to maintain peace in the Kumbh Mela, the police is keeping an eye on anti-social elements including 518 history sheets of Haridwar. Apart from a special team, the intelligence police of the fair is constantly monitoring them. Monitoring is also being done on social media. The fair police has taken a list of history-sheets from the police station and the Kotwalis and identified them.Monitoring will also be done on social media

A social media monitoring team has been formed separately. This team will inform IG Sanjay Gunjyal about the activities going on it. The team will take immediate action if they look suspicious. This intelligence team has been kept separate from the department.