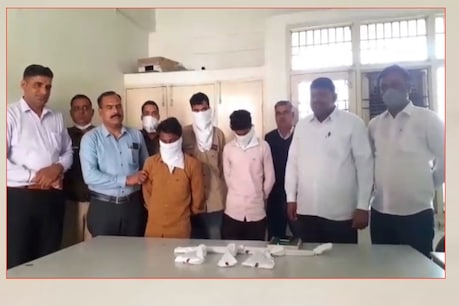 The accused said that they had no money to pay the rent of the house, so planned a robbery.

Haridwar crime news: An unknown person was killed by two youths to pay the rent of a house in Haridwar. The incident took place on 22 February in Bahadarabad police station area. Both used to work as laborers in a rented house in Badrishapuram Colony.


Haridwar. Bahadrabad police station in Haridwar has revealed the murder of a middle-aged man on 22 February. 50-year-old Pappan Singh was murdered by two youths with the intention of robbing Scooty. The accused, who were caught in the police, said that they did not have the money to pay the rent of the house. So they planned to pay rent by robbing Pappan Singh’s scooty and selling it. The arrested accused are youths of Saharanpur district. One’s name is Gurmeet and the other’s name is Naveen. Both used to work as laborers in a rented house in Badrishapuram Colony.

Disclosing the case on Sunday, SSP Senthil Avudai Krishnaraj S of Haridwar said that on the night of 22 February, a person named Pappan was going from Scooty towards his house on the highway. As soon as he stopped on the side of the scooty highway to receive the call on the mobile, then from behind, Naveen and Gurmeet made several stabs in his head with the stick and scooted and escaped. Pappan Singh fell on his head due to bruising and died. On the complaint of family members, the police registered a murder case against unknown people. The police was searching for the killers.Both were walking on the robbed scooty

The SSP said that the police caught two youths with scooty without number plate from Pathri Pawar House, after strictly interrogation, both of them confessed to robbing Scooty by hitting Pappan Singh’s head. Both were arrested when the matter was cleared. Accused of the police said that their financial condition is very bad. They had no money to pay the rent of the house, so they had planned the loot. Police have recovered the poles used in the murder at the behest of the accused. Haridwar SSP also announced a cash reward of two and a half thousand rupees to the police team that disclosed the murder.