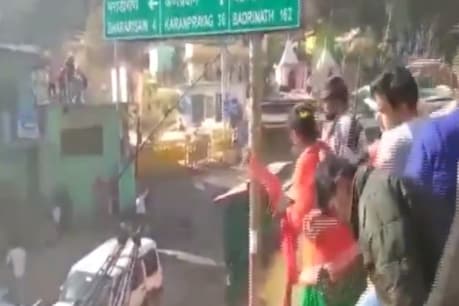 The police tried to explain but people did not agree and threw stones.

On Monday, protesters lashed out at the Diwali Khal area of ​​Uttarakhand. Stones were also pelted on the police team who reached the spot. There are reports of injuries to many policemen in this.

Chamoli. On Monday, the Diwali Khal area of ​​Uttarakhand (Diwali Khal) area fiercely protested. Stones were also pelted on the police team that reached the spot. The police tried to convince the protesters, but they became furious and threw stones at the police. There are reports of injuries to many policemen. Here people were protesting on the extension of the road up to Nand Prayag. The Chief Minister has taken cognizance of this incident. A magisterial inquiry has also been ordered on this.

According to the information, local people were protesting for the demand for extension of 19 km road from Ghat to Nandprayag near Garsine. People shouted slogans here. According to Chamoli police, the police went to the spot and tried to convince people. Protesters in the Diwali Khal area went on rampage during this period and threw out the police barrier. On this, the police tried to stop the protesters first and later chased them. But people became more furious and started throwing stones at the police.

#WATCH I Uttarakhand: People pelted stones after police tried to stop protesters at a barrier in Diwali Khal area.They were going to hold protest demonstration demanding the expansion of 19-km road from Ghat to Nandprayag, near Garsain today.(Video Source: Chamoli Police) pic.twitter.com/OPBQ6qBQgG

Many policemen injured
During the stone pelting many security personnel were injured. At the same time, some serious injuries have occurred. According to police officials, the injured have been admitted to the hospital for treatment, where their condition is said to be critical due to some head injuries. As soon as the matter came to light, Uttarakhand CM Trivendra Rawat also took cognizance of it and issued directions to conduct a magistrate inquiry into the matter. Also, Rawat said that strict action will be taken against those accused in the case.