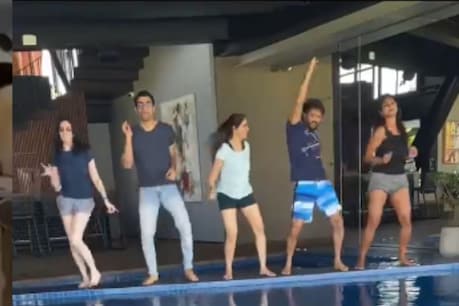 A video of Riteish Deshmukh (Riteish Deshmukh) is going viral on social media. Ritesh was dancing along with his wife Genelia D’Souza and friends on the side of the swimming pool when the leg suddenly slipped.

Mumbai: Bollywood actor Riteish Deshmukh And wife Genelia D’Souza is considered one of Bollywood’s favorite couples. This couple of husband and wife are also very active on social media. Riteish and Genelia often have fun with their friends. They often share their activity on social media. Ritesh Deshmukh has shared a funny video on his Instagram, which is very much liked by people.

In the video Riteish Deshmukh shared on his Instagram account, Ritesh and Genelia are seen dancing with their friends on the side of the pool. While dancing, suddenly Ritesh’s friend’s leg slipped, he fell into the water, Ritesh also fell in the water to save him. But even after falling in water, Ritesh’s fun did not show much effect. Ritesh, Genelia and their friends are seen laughing a lot. Not only this, Ritesh got out of the water and started dancing again. This video is becoming fiercely viral on social media. More than 3 lakh views have been received on this video so far. People have also commented on this blistering video.

Talking about the workfront, Ritesh Deshmukh was seen in ‘Baaghi 3’. He was accompanied by actors Tiger Shroff and Shraddha Kapoor in this film. Apart from this, Ritesh is working in many films. While Genelia D’Souza made her Bollywood debut with the film ‘Tujhe Meri Kasam’. In Bollywood, Genelia D’Souza earned a lot of fame with films like ‘Jaane Tu Ya Jaane Na’ and ‘Masti’. Genelia is more active in Telugu films than Hindi films these days.