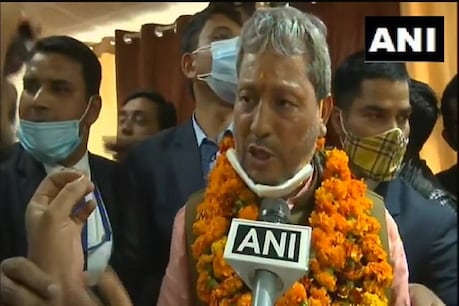 Chief Minister Tirath Singh Rawat has started to look into the disputed decisions of the previous government. (File photo)

With the formation of the Devasthanam Board, 55 temples, including Badrinath, Kedarnath, Yamunotri and Gangotri, came under government control. The BJP was greatly embarrassed by this decision.

Dehradun. Tirath Singh Rawat government of Uttarakhand has started to conduct controversial decisions of former Chief Minister Trivendra Singh Rawat government. These include the case related to Devasthanam board. With the formation of this board, 55 temples including Badrinath, Kedarnath, Yamunotri and Gangotri came under government control. This decision also led to a lot of disgrace for the BJP.

In response to a question on Saturday, CM Tirath Singh said that his government will respect the public sentiment. After taking oath as the 10th Chief Minister of Uttarakhand on Tuesday, Tirath has inducted 11 ministers into the government on Friday. The government’s focus is to fix those works before starting new work. The former Chief Minister Trivendra Singh Rawat implemented and there was widespread opposition.

This was the reason for the opposition of Devasthanam BoardActually former CM Trivendra Singh Rawat has been removed this week. He was constantly in dispute regarding some of his decisions. He neither got the support of the MLAs nor the public on these issues. The biggest decision among them was to take 55 temples of Garhwal region, including Chardham, under government control. Despite all the opposition, the Trivandra government formed the Devasthanam Board. On which BJP leader Subramanian Swamy dragged the government to court as well. The priests associated with the temples say that the Devasthanam board is a conspiracy to take away their rights. In the next year’s assembly elections, there was a possibility of watering the BJP’s plans with this issue. The CM says that he will talk with the Tirtha Purohit Samaj in it and some middle path will be found.

Former Chief Minister Trivendra Singh Rawat’s government had implemented tough decisions regarding the Kumbh going on in Haridwar. In which all passengers were conditioned to bring Kovid-19 negative report. CM Tirath says that it will not be mandatory from April 1 to bring the Kovid Negative Report. Apart from this, another big controversial decision was taken by the Trivandra government which was to constitute the non-commissary commissioner by joining 2-2 districts of Kumaon and Garhwal. The CM says that the government will go with public sentiment on the issue of non-commissioned commissioner.