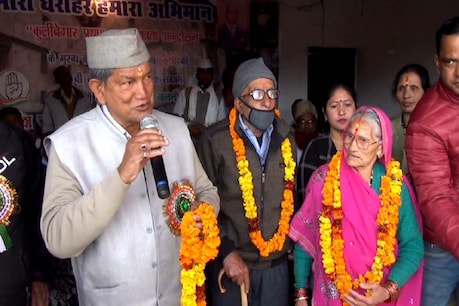 Harish Rawat said on Uttarakhand cabinet- ‘This is the new label and old wine in the bottle’.

Rawat tweeted that there is no newness in the new cabinet of Uttarakhand government. ‘This is an old wine with a new label in the entire cabinet bottle.’ He also targeted the alleged disturbances in the Trivendra government and the new BJP state president Madan Kaushik.

Pithoragarh. Tirath Singh Rawat’s cabinet of Uttarakhand has been targeted by senior Congress leader and former Chief Minister Harish Rawat. He tweeted on Saturday that there is no newness in the new cabinet of the Uttarakhand government. He also attacked the BJP’s new state president Madan Kaushik over alleged disturbances in the Trivendra government. He said that if Kaushik did not get a place in the cabinet, he was made the state president.

Harish Rawat has tried to put the BJP leadership in the dock while taking a dig at changing the face of the government in Uttarakhand. In the political turmoil in the state, where Trivendra Singh Rawat lost his chair, the powerful BJP leader Madan Kaushik also could not find a place in the Tirath cabinet. Although the BJP has made him the state president. The former CM said that only two people were found guilty for the inefficiency, misrule and corruption of the previous cabinet, one of them has been given the post of President of Uttarakhand BJP.

He tweeted and said, ‘Those who were accused of money chatter are also present in the Tirath cabinet.’ At the same time, he said that there is no newness in the new cabinet, saying that the whole cabinet is old wine by putting new label in the bottle.

Actually, it was hoped that some old ministers in Tirath cabinet could be discharged, but this did not happen. All the faces of the Trivendra government were included in the cabinet. Also, four new faces were also given place in it. The Congress leader said that even though the BJP has resolved its internal quarrels by creating such a huge political storm, the people of the state have got nothing out of it. At the same time, BJP’s State Spokesperson Suresh Joshi retorted that Harish Rawat only wants to bring himself into the discussions by tweeting like this. There is no connection with the truth of his words far and wide.