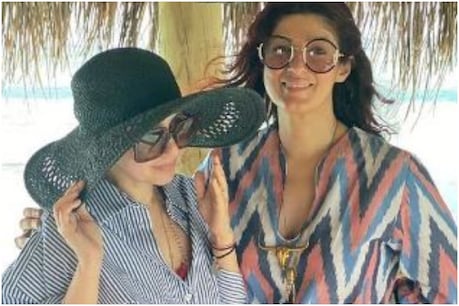 Recently Twinkle Khanna and Akshay Kumar went to the Maldives for a holiday with the family. Then Twinkle’s sister Rinki Khanna was also with him. Twinkle has shared a cute photo with her sister, which is now going viral.

New Delhi Recently, Bollywood’s famous couple Twinkle Khanna and Akshay Kumar arrived in Maldives for a holiday. He went to Maldives with his entire family. Twinkle’s sister Rinki Khanna was also with her in this trip. Twinkle then shared a photo with Akshay as well as his sister. Now this photo is going viral on the internet. Fans are enjoying the chemistry of Twinkle with their sister.

Twinkle Khanna, who is very active in social media, has shared only one photo with her sister Rinke Khanna. Twinkle shared this photo on Instagram, in which both sisters are looking very beautiful. He wrote in the caption of the photo, ‘The most beautiful part of this holiday? I met my sister after one and a half years. For the first time in the last 40 years, we have been so far away from each other. Apart from this, Twinkle has shared many photos with fans. While sharing the picture, Twinkle has also given the hashtag ‘Khanna Sister’. Fans are giving a lot of reaction on this. Earlier, Twinkle’s holiday photo with Akshay became quite viral. He shared a post of the theme ‘Instagram vs Reality’, in which Akshay Kumar is seen with him. They are happily posing to the camera in the first picture. While in the second photo she is seen having fun with Akshay. Let me tell you that this beautiful couple of Bollywood are known for their fun nature. Twinkle is very funny like Akshay Kumar. Know that Akshay and Twinkle were tied on 17 January 2001 in marriage. It has been 20 years since their marriage. They have two children – an 18-year-old son Aarav and eight-year-old daughter Nitara. Talking about work, Akshay Kumar will be seen in films ‘Suryavanshi’, ‘Bachchan Pandey’, ‘Raksha Bandhan’ and ‘Prithviraj’. He is playing quite different roles in films, which the fans are also thrilling about.