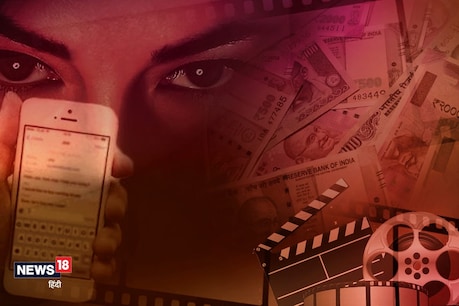 An actress looted Rs 1.6 lakh by trapping a web series maker in a honeytrap (file photo)

The accused actress and her three male accomplices had called the victim film maker at Ghatkopar in Mumbai (Mumbai) and forcibly entered her car and looted Rs 1.6 lakh from her.

New Delhi Recently, a 42-year-old web series maker was looted and looted for 1.6 lakh rupees by trapping him in a honeytrap. A case has been registered against an actress and her three colleagues in this case. According to the report, at the time of the incident, the accused had roamed in the Ghatkopar-Sion area with Victim in his car. At present, the police of Pantnagar is investigating the incident that took place on 10 March. So far no arrests have been made in this case.

An acquaintance of Victim had told that an actress wants to work in a web series. According to a Times of India report, the Victim later called her for an audition on 6 March and the two then became intimate. After the web series maker met the actress, the woman’s boyfriend accused her of exploiting the actress. He also threatened the series maker to file a rape case against him.

The filmmaker tried to convince the actress’ boyfriend that he had formed a relationship only after the actress agreed, but to no avail. The actress’s boyfriend kept calling Victim and called him to meet at Ghatkopar on 10 March. When the Victim reached Ghatkopar, the actress and her three male accomplices attacked her car and beat her up.

Later, the accused took Victim to Wadala, then to Sion. According to the report, the police say that the accused demanded Rs 4 lakh from Victim and snatched their phone to transfer money through the UPI app. However, the accused kept entering wrong password due to not being very familiar with the app and were able to transfer only 1.4 lakh rupees. Later, the accused forcibly took Victim to an ATM, where he asked him to withdraw 20 thousand rupees. After this, the accused got out of the car threatening the Victim. On March 13, Victim lodged a complaint with the Kandivali Police Station. Later this case was transferred to Pantnagar police station.