The simultaneous release of John Abraham’s ‘Satyamev Jayate 2’ and Salman Khan’s ‘Radhey’ can confuse fans. But it would be fun to see who becomes the king of the box office.

New Delhi. The box office clash in Bollywood is going to start once again with the release of Eid. John Abraham The release date of the upcoming film ‘Satyameva Jayate 2’ (Satyameva Jayate 2) is out today. The film has been announced for release in Eid 2021. Trade analyst Taran Adarsh ​​has shared the new poster of the film on his Instagram account. After the arrival of this poster, one thing has been confirmed that John is ready to compete with Salman Khan’s ‘Radhey’ at the box office. 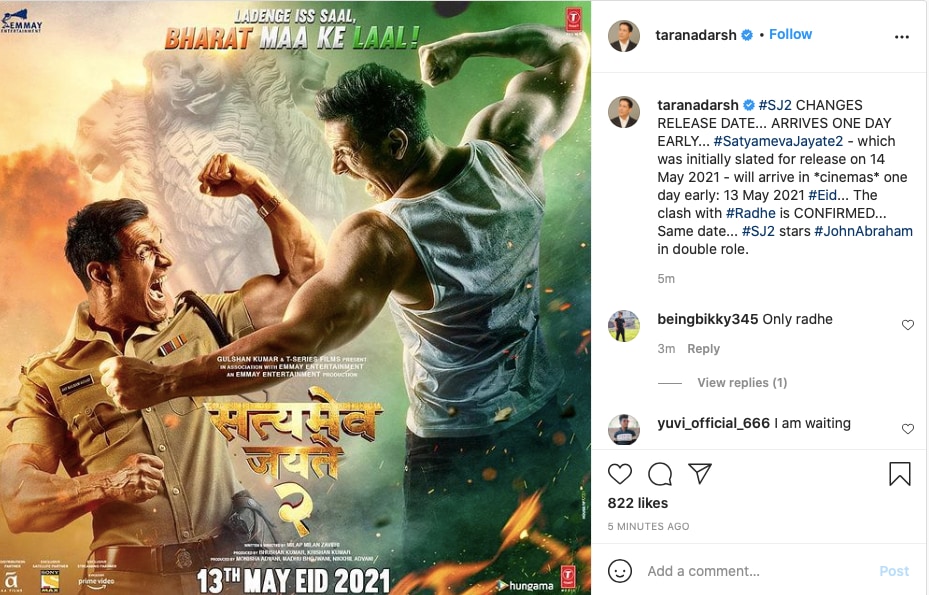 Let the audience know that there is a big craze for Salman Khan’s Eid release film. None of Salman’s films were released in 2020 due to Corona, but at the beginning of the new year, Salman gifted the fans the release of the film ‘Radhe: Your Most Wanted Bhai’ on Eid. Have given. People’s curiosity about the film has increased since now. According to the news, the story of this film of Salman Khan is told to be inspired by a Korean film. Salman Khan’s film ‘Radhey’ is an action drama, whose story is inspired by the Korean film ‘The Outlaws’. The film ‘The Outlaws’ is a full-packed action drama film. Even before this, the story of Salman Khan’s film ‘Bharat’, released in 2019, was told inspired by the Korean film ‘Odd to My Father’. The film was one of the hits of that year.

Now the release of these two big films together can confuse the fans. But it would be fun to see who becomes the king of the box office.