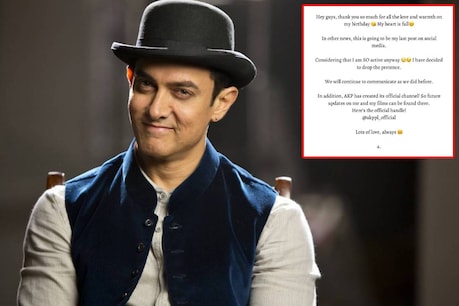 Aamir Khan has made a distance from social media.

Aamir Khan has given the reason behind leaving social media, the video of which is going viral on social media.

Mumbai. Mr. Perfectionist of Bollywood is in discussions these days about distance from social media more than his film ‘Lal Singh Chadha’. Thanking the congratulations received on the birthday, he has announced to say social media accounts like Twitter (Instagram) and Instagram. This news raised questions in the minds of social media users that why did they do this? Recently, Aamir has given the reason behind leaving social media, whose video is becoming viral on social media.

Aamir Khan recently met paparazzi. When he questioned quitting social media, Mr. Perfectionist said in his own style that you people should not make too much money about it. I live in my own tune Where am I on social media? I thought that I do not go anyways, I keep on keeping my tune. I have not said goodbye I’m not going anywhere Even before, he used to talk to his fans through the media. Now the role of media has increased because I will talk to the fans and audiences through them.

This video has been shared by paparazzi Viral Bhayani on his Instagram account, on which a lot of people are reacting. ‘Mr. Perfectionist of Bollywood’ had decided to keep his phone locked till the release of his upcoming film Lal Singh Chadha. The decision to turn off the phone was taken to ensure that their work is not affected by the continuous ringing of their device on the set.

Let me tell you that Aamir Khan, while releasing his statement, said that friends, thank you very much for your love and warmth on my birthday. My heart is full. The second news is that this will be my last post on social media. Although I am not very active on this medium anyway, I have decided to stay away from them. We will talk like we used to.

In 2018, Aamir made his debut on Instagram by sharing a picture of his mother on his birthday, which created panic on the internet.

Talking about the workfront, the actor has returned with beautiful Elli Avram in his fourth special song ‘Harra Fun Maula’. Apart from this, the actor is keeping himself busy with the post productions of his upcoming film ‘Lal Singh Chadha’.