During the meeting, Akshay Kumar shared information about his most awaited film ‘Ram Setu’ with the CM. Along with this, there was a discussion about the Film City Walk film industry in Uttar Pradesh.

New Delhi. Bollywood veteran actor Akshay Kumar Met UP CM Yogi Adityanath (CM Yogi Adityanath). During the meeting, he shared information about his most awaited film ‘Ram Setu’ with the CM. Along with this, there was a discussion about the Film City Walk film industry in Uttar Pradesh. CM Yogi also met Akshay Kumar during the Mumbai tour. There was a discussion again today about the possibilities of the film world in UP. The CM interacted with Akshay Kumar on a number of issues along with film shooting and film city in Uttar Pradesh.

Let me tell you, Akshay Kumar with his leading lady Jacqueline Fernandez and Nushrat Bharucha has reached Ayodhya today for the shooting of this film. Akshay Kumar today shared this information by sharing the first photo of his film’s Muhurta on his Twitter account. Akshay wrote while worshiping Pandits and sharing the picture of Shri Ram Darbar, ‘Today Lord Ayyaram received the blessings of Lord Ram on the launch of the film “Ram Setu” Jai Shree Ram!’ 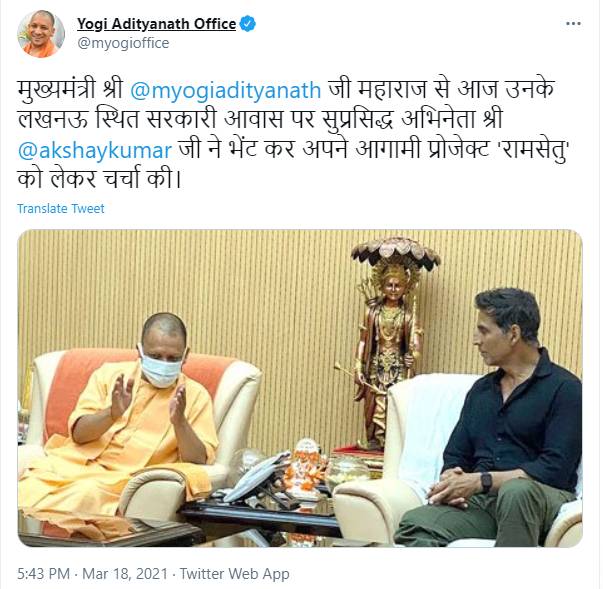 The film ‘Ram Sethu’ is being directed by Abhishek Sharma. This film is to be shot in Ayodhya, the birthplace of Lord Rama. The release date of this film is currently 2022 Diwali. According to Akshay, his film ‘Ram Setu’ is the link between the past, present and future generation.